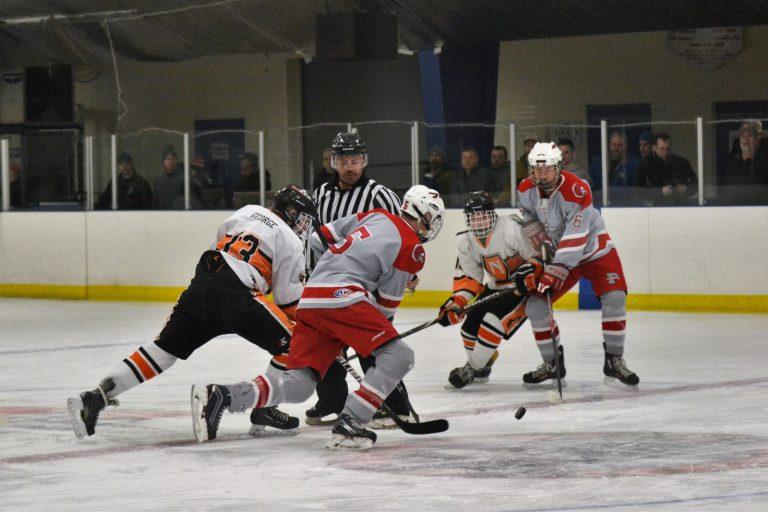 Today is the long day at the 2019 Baron Cup, as after a Friday night that saw just a pair of games in Baron Cup II (won by Amherst and Midview who will meet in the Baron Cup II title game Sunday), today it’s four games on tap starting at 1pm.

Games one and two at 1pm and 3pm will feature the two semi-final games in Baron Cup III, as the two winners will move on to meet in the Baron Cup III title game on Sunday at 1pm.

The first game will feature the #1 seed the Parma Redmen, who kicked off the tourney on Monday with a runaway 6-0 shutout win over the Twinsburg Tigers.

They will battle the Aurora Greenmen, who moved on with the lowest scoring game of the tourney thus far, a 1-0 win over the Lakewood Rangers on Tuesday.

Game two at 3pm will see two more Baron Cup III foes go at it, as the Normandy Invaders will take on the CVCA Royals in what should be a great game between these two Blue Division teams.

A big day from Lukas George helped the Invaders top Westlake on Wednesday by a final of 8-1.

For the Royals, they played in what was the most memorable game thus far of the tourney, as they overcame a 3-0 deficit midway through the second period to top Brooklyn on Thursday 4-3.

The two evening affairs will feature two Baron Cup I games, starting at 5:30pm and then 7:30pm.

The first game of the Baron Cup I semi finals will feature the #1 seeded Mentor Cardinals, who defeated North Olmsted 7-4 on Wednesday, as they will take on the Hudson Explorers.

Hudson advanced on Wednesday with a 4-0 shutout win over the Cleveland Heights Tigers, as William Hannon came away with the shutout win with 12 saves for the Explorers.

The last game tonight will see a #2 versus a #3 matchup, as the Pirates of Rocky River will take on the Kenston Bombers.

The Pirates were 7-1 winners on Thursday evening over Benedictine, as they took a quick 3-0 lead and skated to a six-goal win.

Kenston won the final game on Thursday evening, as they defeated the Strongsville Mustangs by a final of 4-1. The Bombers and Mustangs were tied midway through the third period before they finally broke through and skated to the win.

Don’t forget, you can hear EVERY GAME of the today’s four huge matchups by clicking HERE or heading over to AllSportsCleveland.com – starting Today at 1pm