2019 Baron Cup: Amherst Outlasts Olmsted Falls 6-3, Advances to the Championship Round on Sunday 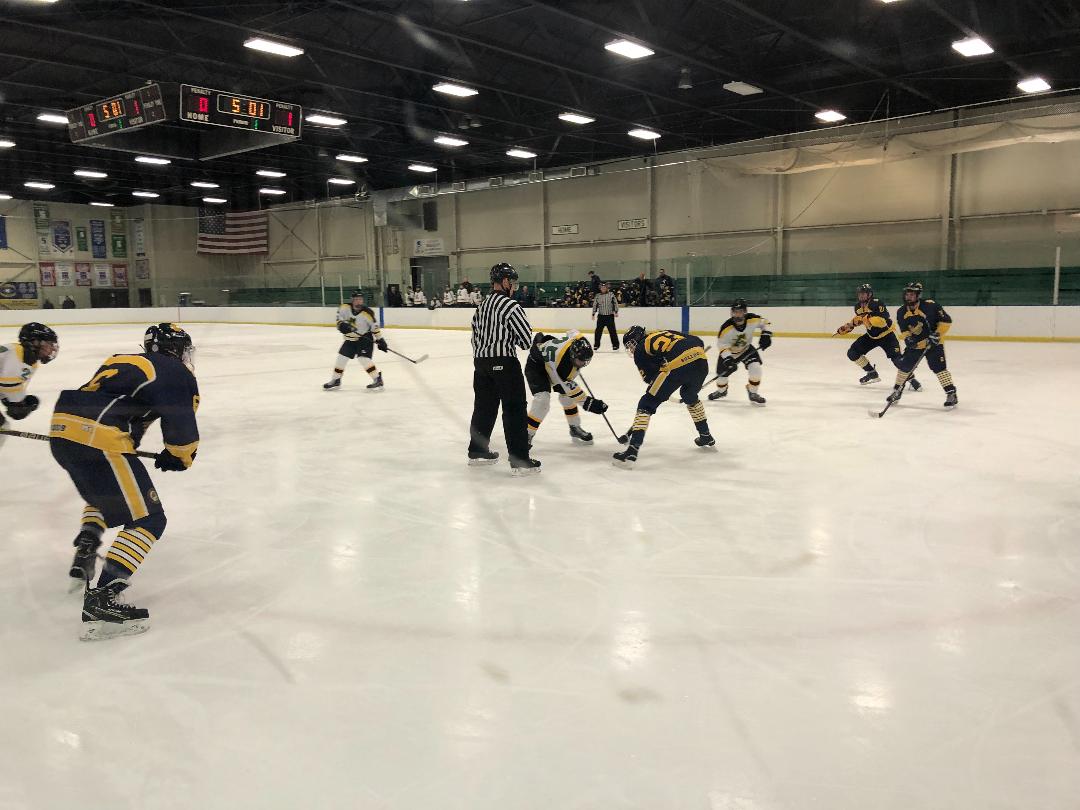 BROOKLYN, OHIO – The Amherst Comets burst out for five goals in the 2nd period and beat Olmsted Falls 6-3 in semi-final action of Baron Cup II play on Friday evening.

Both teams came out prepared and ready to play as the action went back and forth consistently through the first half of the opening period until Olmsted Falls was able to break through with the first score of the game just 7 minutes in.

Dominic Conte took a pass up the left side of the ice from Alex Kerkay and was able to slot home the 1 on 1 opportunity to give the Bulldogs the opening goal.

The score would only remain 1-0 for a short time however as Amherst’s Mike Giannuzzi was able to capitalize off a face-off deep in the Comet’s attacking zone to knot the score up at 1 at the 4:51 mark of the period. The assists on the goal were credited to Jacob Kramer and Jacob Fekete.

The score would remain 1-1 as both teams hit the locker, but little did we know the action was just starting the heat up inside the John M. Coyne Recreation Center.

The second period saw its fair share of goals scored as both teams would combine to notch 7 goals with 5 coming in the first 5 minutes of the period.

Amherst would get the scoring started with two goals only 15 seconds apart as Joey Kramer and Nathan Harmych would both light the lamp to give Amherst a 3-1 lead.

Olmsted Falls would then answer back with two of their own as Noah Voelker would add his name to the score sheet and Conte would grab his 2nd goal of the contest on an assist from Voelker and Max Kirth-Gruszczynski.

However, the tie score would be short lived once again as Amherst would find the back of the net twice more before we had even reached the halfway mark of the period.

After already assisting on two goals in the game, Amherst’s Jacob Kramer would slap home a goal of his own off the cross-ice feed from Tyler Waldecki.

Waldecki would then follow up his assist with a goal to give the Comets the 5-3 advantage.

The score would remain 5-3 until the final minute as Giannuzzi scored his 2nd goal with 30 seconds left on the clock to close out a wild 15 minutes of hockey and putting Amherst in front 6-3.

As it so happens, Giannuzzi’s goal would not only close out the 2nd period but would also close out the scoring for the rest of the game as neither team was able to sneak the puck past either goalkeeper.

On the night, Olmsted Fall’s goaltender Nathan Chandler would notch 27 saves, while his counterpart for Amherst, Brady Grove stopped 20 of the Bulldogs’ shots.

At the end of the game, Jacob Kramer was named the Cleveland Monsters’ Player of Game as he was able to tally a goal and 3 assists during the game.

Next Up: Amherst, the top seed on the Baron Cup II division, will square off against the two-seed Midview in the championship game on Sunday, February 10th at 3pm.