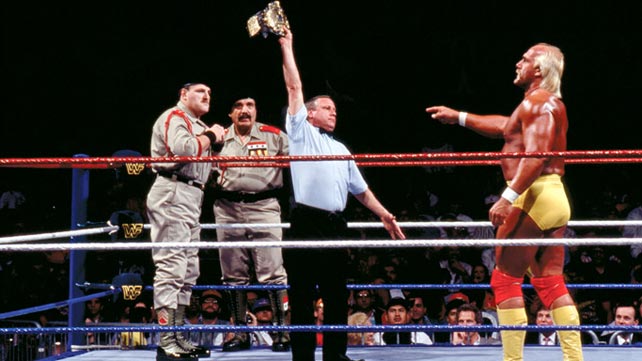 In a Wrestlemania often overlooked, this patriotic version of the yearly classic tore down the house in Los Angeles. The retirement match between Ultimate Warrior and Macho Man is easily one of the greatest matches in Mania history. Hulk Hogan defended all of America in his win against champion Sgt. Slaughter to reclaim his World Title.

Who can forget the first last and only blindfold match between Rick The Model Martel and Jake The Snake Roberts? This was also the final match for legendary tag team the Hart Foundation as they dropped their WWF tag titles to The Nasty Boys. The only sad note, is the staggering number of performers, commentators, managers and referee’s who are now dead from this show. An insane number of 12 total.  Truly sad.

With a yearlong build up to this “Once In a Lifetime Clash” between John Cena vs The Rock, it was HHH vs The Undertaker that stole the show in Miami. In a match that could have easily been ranked in the top five of Mania history these two first ballot Hall of Famers kept the crowd in awe and guessing for over 30 minutes of the most dramatic action in WrestleMania history. Cena vs The Rock and Punk vs Jericho was also great. It was a solid card from top to bottom in front of a hot crowd.

This Wrestlemania was live from Trump Plaza for the second consecutive year for the only time in history. The main event was one of the most famous of all time and one that people still talk about 25 years later as the Mega Powers exploded.

It was also a tremendous undercard that saw The Ultimate Warriors first ever loss, as Rick Rude beat him for the IC title. Another great match often overlooked on the card was Andre The Giant vs Jake The Snake Robert with Big John Studd as ref, mix in a run in from Ted Dibase and this was an instant classic. Also of note on the card was the return of Rowdy Roddy Piper and the Twin Towers beating the Rockers.