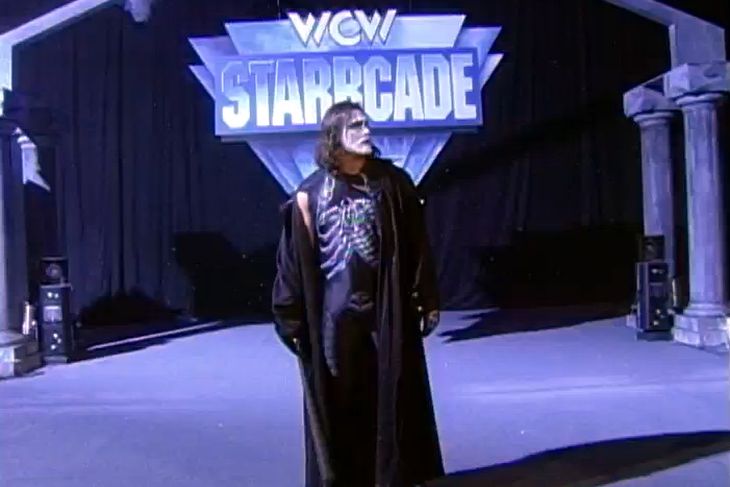 Starrcade 1997 drew a buy rate of 1.9, the best WCW ever achieved. The event became the biggest-grossing pay-per-view in WCW history. While it may have been a successful night financially, it would prove to be the night that killed WCW.

As mentioned in the two prior articles, WCW had already done a lot to damage their product during what was their biggest run ever. A run that saw giant success despite several poor decisions.  Ones that included an incredibly botched feud between Hulk Hogan and Rowdy Roddy Piper.  Along with a World Champion in Hogan that almost never defended his title.

You can read about both of those miss steps here.

The one thing that kept the boom period going however, was the looming fact that eventually the Hero Sting would conquer the Evil Hollywood Hulk Hogan and restore everything right in the world.

To further establish the payoff would be huge, WCW kept Sting, their franchise player out of the ring from September 1996 – December 1997, just to assure this fact.It was a no brainer, it should have worked! Then, the two biggest ego’s in the wrestling world got in the way, Kevin Knash and Hulk Hogan, and it all failed!

Let’s take a closer look shall we?

Ironically enough the night started off great with a five star classic between Cruiserweight Champion Eddie Guerrero and Dean Malenko. Sadly, the announcers barely talked about the gem in front of them, and instead opted to remind us about 45 times that we “would be” witnessing the biggest night in Professional Wrestling History.

It was as if they didn’t realize the Pay Per View had already begun, and they didn’t need to keep trying to sell it. Meanwhile, Malenko and Guerrero tore down the house with as little as a mention from the announce team.  They continued to put full focus on the nights main event, and how it would forever change all of our lives.

It was after Eddie defeated Dean to retain the belt that the rest of the night went south quickly. It was at this time that the ego of Kevin Knash took center stage as he refused to show up to the arena for his scheduled match against The Giant.  Claiming that he had some bad “eggs” earlier in the morning, and felt as though it caused him to have a heart attack.  This is a story I was able to confirm personally with The Giant when I met with him back in March of 2002.

The feud had gone on for months with Knash getting the better half, this was supposed to be him returning the favor for The Giant, but once again, the ego of Knash got in the way as he chose to no show the event all together. Instead it led to a very awkward promo with Scott Hall eventually getting himself choke slammed by the Giant in a weak payoff.

The fans in attendance didn’t enjoy it, the fans at home who paid good money to order the Pay Per View weren’t thrilled that one of the headliners was cancelled with little to no explanation. Fans paid to see this pay off and didn’t get it.  It was supposed to the culmination of the feud and it didn’t happen.  Not a fatal mistake for WCW, but a bad one.  The fatal one would come later in the evening.

The next match wasn’t much to write home about, but wasn’t terrible either. It was Scott Norton, Virgil and Randy Savage defeating The Steiner Brothers and Ray Trailer (Big Bossman) in a six man tag.  A strange decision to have The Steiner Brothers lose, but a little foreshadowing that a split may be on the way.

The bright spot of the emerging Superstar Bill Goldberg crushing Steve Mongo McMichael in under 6 minutes, was quickly diminished when the following match, once again proceeded to “rip off” the fans.

For months, WCW had been teasing a match between Raven and Chris Benoît. Only for every time WCW to pull the rug from underneath the fans feet, and replace Raven with Perry Saturn at the last second.  This went on for several months and the build grew bigger and bigger as to when the match would finally occur between the bitter rivals.

Surely, the biggest card in company history would be the perfect time to actually let the match occur? Well, WCW, despite advertising it, charging for it and collecting money for it, did it again. To the shock of everyone watching, once again they decided to switch Raven for Perry Saturn to take on Chris Benoit.  Infuriating to say the least!  That made two matches fans were really excited to see, that they didn’t get too.

Speaking off matches that fans wanted to see that they were robbed of seeing, it happened again when the highly anticipated grudge match between Ric Flair vs Curt Henning for the United States Title was also canceled.  They pulled Ric Flair out of the match and switched in DDP.  I must say however, it ended up being a great match that saw DDP walk away with the title.  Nevertheless, not the match fans wanted.

Lex Luger lost to Buff Bagwell in a match no-one remembers between two guys with great physiques and little to no talent in ring.

It was then time for the Co-Main Event, the battle for Nitro between over the hill Larry Zbyszko and NWO Figure head Eric Bischoff.  The only mystery or intrigue in this one was Bret Hart as special guest referee.  It was his first big WCW appearance and no one yet knew where his allegiance lied.

It wouldn’t take long to figure out as he punched out Bischoff.  This gave the victory to Larry Zbyszko despite the fact it was Hart who actually toppled Bischoff.  Yet another “stellar booking decision” by WCW on “The Biggest Night in Pro Wrestling History”.

The Main Event truly was one of the most highly anticipated matches in Pro Wrestling History.  Easily, no one even thought to question it.  You  had a 18 month build up for the Ultimate Bad Guy to be taken down by the Ultimate Good Guy.  It almost seemed too simple to screw up, but WCW sure found a way to do just that.

Sting showed up out of shape and Hulk Hogan refused to do a clean job for him.  So instead of giving the fans the ending they wanted, they went with a congested, confusing finish of Nick Patrick giving a fast count to a pinned Sting, to allow Hogan to retain the title.  Only one small problem, the count wasn’t fast, so when Bret Hart came out and reversed the decision restarting the match, it made no sense.  Everyone was confused and angry.  Sting would go on to win as everyone in the arena and at home, sat in their seats pissed off and confused.

In one night, WCW managed to ruin what could have been the greatest night in the sports history.  Instead, this spelled doom for their company and never again did the fans have any faith in their storylines, wrestlers or pretty much anything they promised or did.  Later in 1998 the Goldberg craze caught fire, but they didn’t wait long to screw that up either.

In the end, this killed WCW, as they were out of business by 2001. What could have been?