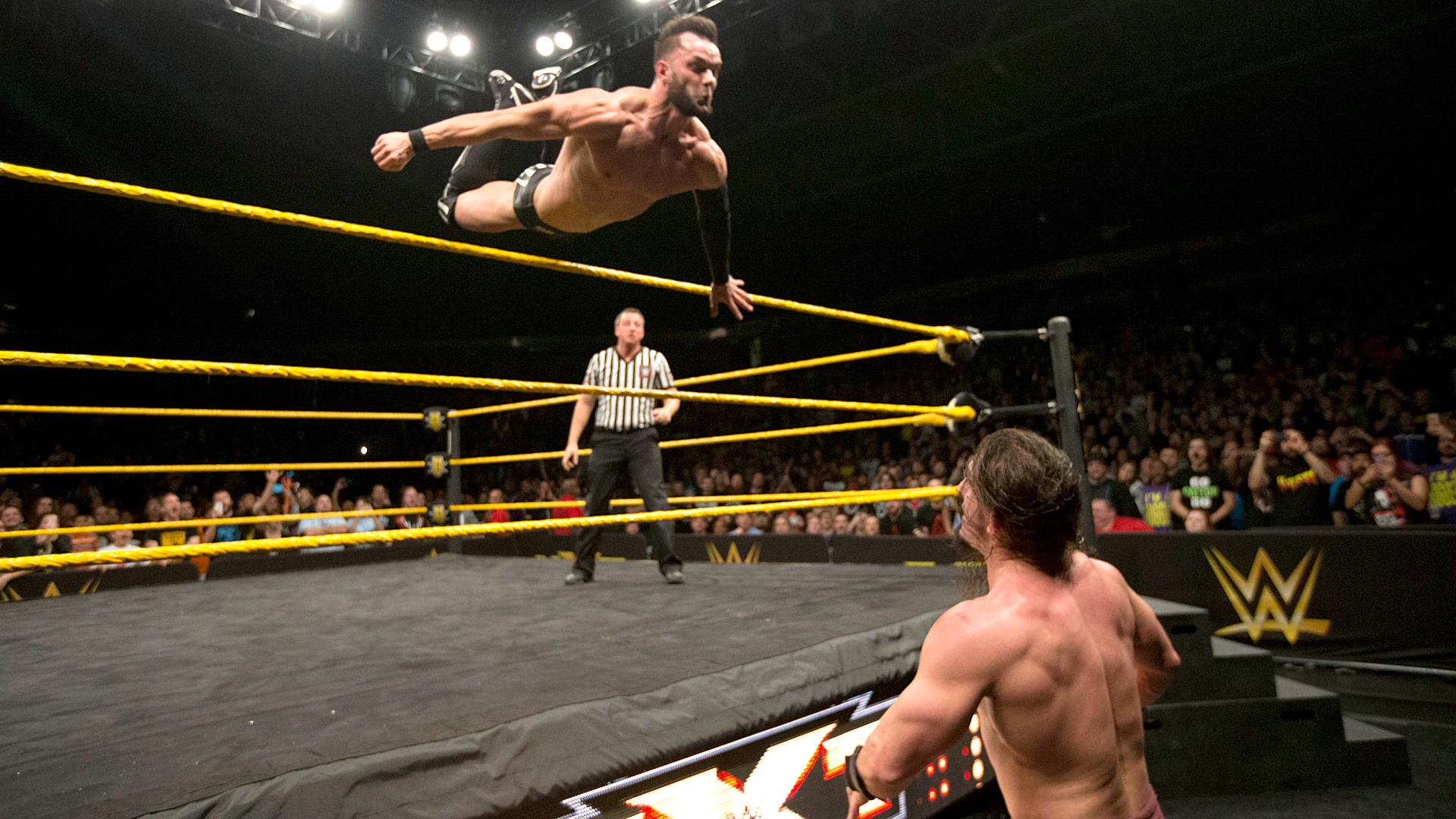 Match 1: The Vaudevillains vs. Hugo Knox and Tucker Knight
Aiden English and Hugo Knox start off the match. Knox tries to get momentum on his team’s side early, but is slowed down early by English, who tags in Gotch. Gotch and English take turns inflicting punishment on Hugo Knox. Gotch attempts a suplex but Knox reverses it and tags in Tucker Knight. The big man starts taking out Gotch and English. Knight throws Gotch into the corner and looks to punish the Vaudevillain team member. Gotch stops Knight in hist tracks with a foot to the face, Gotch tags in English as they execute the Whirling Dervish.

Dana Brooke and Emma Interview
The two women speak on how they predicted Asuka to defeat Deonna Purrazzo again a few weeks ago. They say that Purrazzo is a nobody and that when they something will happen, it happens. Emma also says she will make an example out of her opponent tonight.

After their vicious attack on Enzo Amore, Dash and Dawson have learned that they will defend their NXT Tag Team Titles on March 12 at Roadblock against Enzo Amore and Colin Cassady.

Emma was aggressive early, picking apart Garrett. After a double underhook suplex, Emma taunts the crowd and goes back to punishing Garrett. Garrett tries to fight back but Emma shuts down the offensive attempt. Emma puts Garrett into a submission hold and inflicts a lot of pain onto her opponent before Santana Garrett fights out of the hold and starts to gain momentum, highlighted by a Russian leg sweep. Garrett goes to the top rope, but is knocked down by Emma, who puts Garrett into the Tree of Woe and delivers a series of kicks. While Emma is being separated by the referee, Dana Brooke starts pulling the hair of Santana Garrett. Emma throws Garrett to the mat and nonchalantly picks up Garrett, who almost steals the victory with a roll-up bridging pin. Emma pushes her off and immediately locks in the Emma Lock, forcing Garrett to tap out.

William Regal Talks with Eva Marie and Nia Jax
Regal says he heard the tandem’s interview after their win last week and says they needed to be treated like the stars they are. He informs them that their next tag team match will be against Bayley and Asuka. He then says he has to go introduce the newest NXT member.

William Regal Introduces The Newest NXT Member
Regal is in the ring to start off the introduction. He says the newest NXT acquisition is known all around the world and is one of NXT’s greatest signing. The music hits and it is former TNA Heavyweight Champion, Austin Aries. The crowd erupts and Aries starts to head down the ramp before he is attacked by Baron Corbin. Corbin lays out Aries with End of Days on the floor outside of the ring. Corbin then holds up the torn Austin Aries t-shirt, shouts out “An Eye For An Eye”, and throws the shirt at Regal.

Match 3: Steve Cutler vs. Elias Samson
Samson comes out with a mean streak, punishing Cutler in the corner. Samson has no remorse for Cutler, hitting him with a running elbow. Samson takes some time to play his “air guitar” before going back to his attack on Cutler. After an elbow and running knee, Samson hits Cutler with a swinging neckbreaker for the win.

Hype Bros Promo
Mojo Rawley and Zack Ryder say that they might have taken their competition too lightly and that their loss to The Vaudevillains was their wake-up call. Ryder talks about how the Hype Bros want to be the best tag team in the WWE. Rawley talks about getting revenge on Thee Vaudevillains. He says since they want to send silent messages, they should rough them up until they can’t say anything. The two do their handshake and walk off. After they leave, The Vaudevillains come out of nowhere and grin at each other.

Match 4: Neville vs. Finn Balor
The two competitors start the match off slow, getting a feel for each other’s style. A few minutes into the match, Neville gets his fast-paced offense going, capped off by a hip toss into a cartwheel dropkick. The NXT Champion battles back with a little bit of his own innovative offense before Neville regains control.

Neville stands tall going into the commercial break. After the quick commercial break, Neville is still in control of Balor. Neville corners Balor and charges at him. Balor catches Neville and launches him outside of the ring, with Nevlle’s head hitting the steel steps. Neville gets back in the ring and hits Balor with an elbow, knocking him out of the ring. Neville moves to the ring apron and hits a moonsault off the ropes onto Finn Balor. Neville is the first competitor to his feet and he wastes no time throwing Balor back in the ring and locking in a submission hold. Balor finds the will to fight out of the hold, as the two exchange strikes until Balor hits a Pele kick. Neville retreats to the outside, as Balor hits him with a baseball slide and then a boot to the face . Balor grabs Neville and throws him back in the ring, immediately going for the pin.

Neville kicks out but then Balor goes to finish off Neville. Neville reverses and hits Balor with a few kicks and a vicious German suplex. Neville hits another German suplex for good measure, this time locking his hands for the pin. Balor kicks out, but looks spent. Neville goes to the top rope for the Red Arrow, but Balor gets up. Neville jumps over him and hits Balor with an enzuigiri. Neville goes back to the top rope for a second attempt at the Red Arrow, but Balor gets up and hits Neville with a kick that knocks him out of the ring. A sprinting Balor then jumps over the top rope onto Neville.

Balor throws Neville back in the ring and looks for the Coup de Grace but Neville stops him in his tracks. Neville climbs up to meet Balor and delivers a hurricanrana from the top rope. Neville doesn’t stop moving, going to the top rope again. Neville once again has to readjust in mid-air as Balor moved out of the way. Neville hits a roll and runs at Balor, who reverses with the Sling Blade. Balor charges at Neville, who moves out of the way and looks to roll up Balor. Balor kicks out, catches Neville’s kick and hits him with a clothesline that almost takes Neville’s head off.

Balor hits Neville with a corner dropkick, followed up by Coup de Grace. Balor isn’t done, hitting Neville with a Brainbuster before finally going for the pin. Balor gets the one, two, three and it’s over. After the match, the two shake hands out of respect for each other.

Samoa Joe and Sami Zayn Talk About Their Match Next Week
Both men talk about how the other has relied on people to get to where they are. Samoa Joe says he is the reason Sami Zayn has a career. He also says next week, he’ll be the reason Zayn won’t have a career.