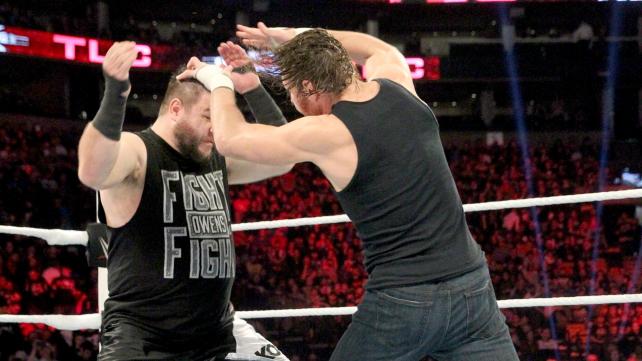 Ambrose limps down to the ring and grabs a chair to sit down on.

While in the ring, Ambrose talks about he doesn’t plan things. He says he just does things on the fly and that it doesn’t always work out, but this time it did.

He talks about what could happen if he beats Triple H at Roadblock and goes on to Wrestlemania as the WWE World Heavyweight Champion. The Lunatic Fringe looks to expand upon his thoughts before he is interrupted by Kevin Owens.

Owens says that Ambrose is talking nonsense and that people should be more worried about who he will defend the Intercontinental Title against at Wrestlemania.

The two exchange words before Owens tries to ambush Ambrose, which results in a chair shot to Owens. Ambrose challenges Owens to an impromptu match, but Owens walks away.

Match 1: The Usos vs. Sheamus and Rusev

Sheamus and Jimmy Uso start the match. Both competitors use flurries of offense before bringing in their teammates.

Jey Uso goes for a Samoan Drop, but Rusev reverses it and pushes Jey outside of the ring. Jey gets back on the ring apron but is distracted by the double-team and dropkicked to the outside by Rusev. While the referee is distracted with Rusev, Sheamus throws Jey Uso into the barricade.

Teamwork by Sheamus and Rusev has Jey worn out. The constant tags keep both members of The League of Nations fresh.

Rusev starts to taunt Jimmy Uso, which ends up backfiring on him as Jey reverses a back suplex and follows it up with a DDT on Rusev. Rusev tags Sheamus in just as Jey tags in Jimmy.

Jimmy starts to unload on Sheamus. A pin is broken up Rusev, who has his own momentum used against him seconds later to go over the top rope. Both Usos find an opportunity to go airborne.

A few superkicks to members of The League of Nations has The Usos in business. A top-rope splash on Sheamus is countered by knees to the gut, who recovers and delivers a Brogue Kick to Jimmy.

Sheamus goes for the cover and gets the three-count. After the match, The Dudley Boyz come out carrying a table. Jey tries to defend his brother but he is taken out.

The Dudleys turn their attention to Jimmy. They ambush Jimmy and then kick over the table they set up when they came down to the ring.

Match 2: Dolph Ziggler vs. The Miz

Miz immediately lays out Dolph as the bell sounds to start the match. Miz is attacking Ziggler in the corner and tries to go corner-to-corner with his patented big boot, but Ziggler moves and catches Miz in a backslide pin for the three-count.

R-Truth is getting food at the buffet table as he sees Goldust eating alone. Truth tries being friendly, but Goldust is ignoring him. Goldust says he’s done with games and Truth says he isn’t playing games. Truth tries telling Goldust they should be tag team partners, but Goldust doesn’t trust Truth’s kindness. He is nervous Truth is going to smash his food in his face, so he does it himself and walks away.

Both women try scoring pinfalls early, but both competitors kick out with ease. Lynch gets her offense going with some arm drags, but Banks retaliates with some forearms and an arm drag. After a sunset flip that Lynch kicked out of, both women attempt dropkicks at the same time. As both wrestlers are getting to their feet, the Divas Champion Charlotte comes out with her father, Ric Flair. Smackdown takes a commercial break.

After the commercial break, Sasha Banks is in control of Becky Lynch. Charlotte is sitting at ringside, watching the match up close. Becky battles back, as the Lass Kicker starts rolling offensively, capped off by a Bex-Plex. Lynch goes for the pin but Sasha kicks out.

Lynch hits a leg drop and elbow drop, but misses the second leg drop. Sasha takes advantage right away and hits Becky with double knees to the face. Banks goes for the cover, but Lynch kicks out.

Both women get to their feet and Becky goes for a roll-up pin, but Sasha reverses the pin attempt with the Bank Statement. Becky is able to reach the ropes to make Sasha break the hold.

Sasha goes to grab Becky, who hits Banks with a foot to the face and looks for the Dis-arm-her. Banks reverses the hold, throws Lynch into the corner and hits her with two sets of double knees to the face.

Banks goes for the cover but Lynch kicks out. Banks hits Lynch with a kick and looks to capitalize. She goes off the ropes but is stopped in her tracks, being thrown up in mid-air and caught with a European uppercut when she comes down. Lynch goes for the cover, but Sasha kicks out.

Lynch and Banks exchange strikes, as Banks tries to steal the victory with a backslide. Lynch rolls through and dropkicks Banks out of the ring. Lynch goes for a dive off the ring apron, but Banks dodges.

Both women clothesline each other and are down outside the ring. Ric Flair gets up and starts strutting around Banks and Lynch, as he lets out an arrogant “Woooo!” in each competitor’s face.

Sasha and Becky confront Flair, as Charlotte attacks them both from behind. Charlotte starts to beat down both Becky and Sasha.

Match Ends In A Draw

When asked about her actions, Charlotte says neither woman deserves to face her at Wrestlemania. When questioning Renee, Charlotte mocks Renee’s lack of having the inside scoop.

Renee informs Charlotte that she does have the scoop and that Charlotte will defend the Divas Title against Sasha Banks and Becky Lynch in a Triple Threat Match at Wrestlemania, leaving Charlotte and Ric Flair speechless.

(Replay of The Undertaker Warning Mr. McMahon About Wrestlemania on Raw and A Reminder That Shance McMahon Will Be On Raw Next Week)

Before the match, The New Day bash The League of Nations and also express their confusion on how Y2AJ received a shot at their Tag Team Titles.

They also acknowledge that Xavier Woods is from Atlanta. They say even though Atlanta is trash, Woods made it out of the city and made it big.

Kingston tries attacking Styles but Styles fends him off and jumps over the top rope onto Xavier Woods. Styles gets to his feet to see Big E challenging him. As Big E distracts Styles, Kofi hits him with a baseball slide.

The New Day taunt AJ, Smackdown goes to commercial break. After the commercial break, Kofi is in control of Styles, wearing him out with the stomping in the corner followed by a running dropkick. Styles starts to fight back, reversing Kofi’s top rope attempt into a backdrop. Styles starts rolling with his innovative offense, before Kofi catches him in the SOS. Styles kicks out, but Kofi starts sizing him up for the Trouble in Paradise.

Styles dodges the maneuver and hits a Pele kick. Styles charges at a cornered Kofi, who launches him over the top rope. Xavier Woods and Big E try to interfere, but the referee ejects them from ringside.

Moments after the rest of The New Day is ejected, Styles hits Kofi with a springboard elbow and covers him for the pin. After the match, The New Day try to ambush Styles, but he uses his quickness to escape the situation.

(Announcement of Match Between Brock Lesnar and Bray Wyatt at Roadblock)

Bray Wyatt Promo
Wyatt says he has seen a beast rise, and the beast is Brock Lesnar. He says that Brock has conquered every man he has faced but claims he is more than a man. He says beasts bow to him and soon Lesnar will too.

Match 5: Dean Ambrose vs. Kevin Owens
Ambrose gets on the offensive early, taking down Owens with numerous hip tosses until Owens targets the injured ribs of Ambrose. Ambrose tries to fight back but Owens’ relentless offensive attack is too much. Ambrose finds an opening and looks to hit Dirty Deeds, but Owens gets out of it and rolls out of the ring. Smackdown takes a commercial break. After the commercial break, Owens is in control, targeting the injured ribs of Ambrose once again.

After attacking Ambrose in the corner, Owens hits a running senton. Owens locks in a submission hold, contorting the body of Dean Ambrose.

Ambrose fights back, only to have his own momentum used against him to send him over the top rope. Owens goes outside and hits another running senton on Ambrose. Ambrose gets back into the ring at the count of 9 just to be thrown back outside the ring. Owens throws Ambrose into the barricade and then screams at commentator Mauro Rannallo.

Owens goes and grabs Ambrose so Mauro can proclaim how good Owens is to Ambrose. Ambrose hits a lariat on Ownes and gets in the ring. Owens gets into the ring at the count of 8 and charges at Ambrose, who counters and throws Owens into the steel ring post.

Ambrose starts to channel his inner “lunatic” offense, capped off by a diving attack to the outside of the ring on Owens. Ambrose throws Owens back into the ring and goes to the top rope, only to be tripped up Owens.

Owens hits his patented Cannonball in the corner and goes for the pin. Ambrose kicks out, which shocks Owens and has him put Ambrose on the turnbuckle. Owens looks for a superplex, but Ambrose fights Owens off of the turnbuckle and hits a diving elbow onto Owens. Ambrose covers Owens but Owens kicks out.

Owens goes for another running senton, but Ambrose gets his knees up to block it. Both men get to their feet and Ambrose hits Dirty Deeds on Owens and covers him for the one, two, three.