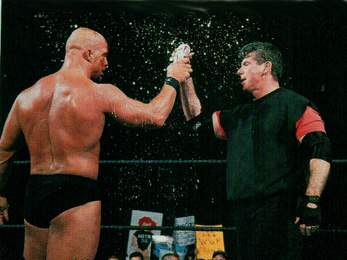 WrestleMania has seen some of the biggest shocks and twists over the years. Perhaps none bigger then Seth Rollins cashing in the MITB to win the World Heavyweight Title to close out Wrestle Mania 31.

Others may consider the Undertaker losing to Brock Lesnar the year before as the biggest shock. Most will tell you that Stone Cold turning heel at WrestleMania 17 will forever be the largest shock / turn of all time, not just in WrestleMania history, but Wrestling history!

While it would be impossible to put them in order from most important to least, I thought it would be fun to list them, simply in chronological order. While not every Mania is represented on this list, most are. Enjoy!

WrestleMania One – Rowdy Roddy Piper and Cowboy Bob Orton Jr. simply leave Mr. Wonderful Paul Orndorf laying in the ring after the loss. It leads to Mr. Wonderful going on a large run as a face over the next year, before once again turning heel on Hogan.

WrestleMania III – Andre The Giant turning heel set’s up the main event, however, one must never overlook Brutus Beefcake turning face and becoming “The Barber” at this same event.

WrestleMania IV – Bret Hart attack’s Bad News Brown and destroys his trophy after the 20 man battle royal. Bret Hart goes on to become one of the most popular wrestlers of all time.

WrestleMania V – Rick Martel breaks up the highly popular and former champion tag team Strike Force when he turns on Tito Santana by refusing to tag in, and walking away from the match. Martel goes on to become “The Model”.

WrestleMania VI – Andre The Giant fights his last match and then promptly punches Bobby Heenan in the face to hear the cheers of 67,000 strong in attendance one more time before calling it a career.

WrestleMania VII – Queen Sherri turns on Macho Man Randy Savage after he loses his career match against The Ultimate Warrior. Elsewhere, Miss Elizabeth shows up to fall in love with Savage once again while Sherri ends the night with The Million Dollar Man.

WrestleMania VIII – Behind the curtain, Jake the Snake Roberts holds up Vince McMahon and promptly leaves the WWE right after his match.

WrestleMania IX – Hulk Hogan shows up after the main event and defeats Yokuzna for the WWF title, less then two minutes after he won it.

WrestleMania X – Mr. Perfect turns back to heel and DQ’s Luger against Yokozuna in the title match.

WrestleMania XI – Yokozuna returns from exile to help Owen Hart become one half of the WWF Tag Team Champions.

WrestleMania XV – Chyna leaves the corporation to rejoin DX, only to moments later once again join the Corporation as he and HHH double cross DX.

WrestleMania 2000 – Vince McMahon turns on The Rock to help his son in law HHH retain the WWF Championship.

WrestleMania X7 – The unthinkable happens as Vince McMahon, for the second straight year, screws the Rock and joins forces with Stone Cold Steve Austin to help Austin win the title from The Rock.

WrestleMania X8 – The Outsiders attack and turn on Hulk Hogan following his epic loss to The Rock.

WrestleMania XIX – Kurt Angle shakes the hand of a shaken Lesnar at the conclusion of the main event. Not really a turn, but Angle did come back as a face months later following his neck surgery.

WrestleMania 29 – Not exactly a huge shock, but Big Show turns on his partners Randy Orton and Shameus as they are defeated by The Shield.

WrestleMania 31 – WrestleMania has a gigantic shock for the second straight year as Seth Rollins cashes in the MITB to win the title over Roman Reigns and Brock Lesnar.