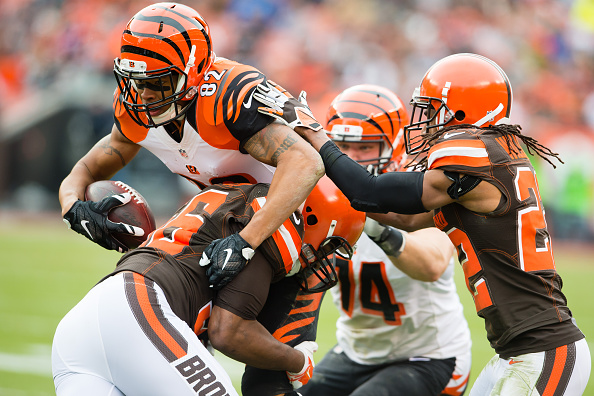 Jumping into the Top 3, or should I say pouncing, the Bengals avoided an epic melt-down in Cleveland, which is about the only thing that would have helped the Browns even have a chance in that game. Without Tyler Eifert, Leon Hall, and George Iloka the Bengals were able to improve to double-digit wins on the season, which speaks to the depth Marvin Lewis has built in Cincinnati during his tenure.

Joining the double-digit win club after their win over the Chargers, Denver jumps up a spot from last week. The defense was dominant once again, returning an interception back for a TD curtesy of LB Danny Trevathan. When the Broncos take on Oakland next week Chris Harris Jr. will look to duplicate his performance when the returned a pick-six against the Raiders the first time these division rivals met this season.

It would be so ideal if we could just have the Patriots play Cincinnati this week – instead the Houston Texans will earn the chance to take advantage of an extremely rare two-game losing streak in New England. For ranking sake, I had to drop them a bit more than I would have liked, but the losses to Denver and a bad Philadelphia team deserves some type demotion.

Thanks to yet another controversial call by the officials, Green Bay was able to run another play with time expired to win the game on a Hail-Mary pass to TE Richard Rodgers. If the Packers lose that game, the landscape of the NFL looks a lot different than what it is this week.