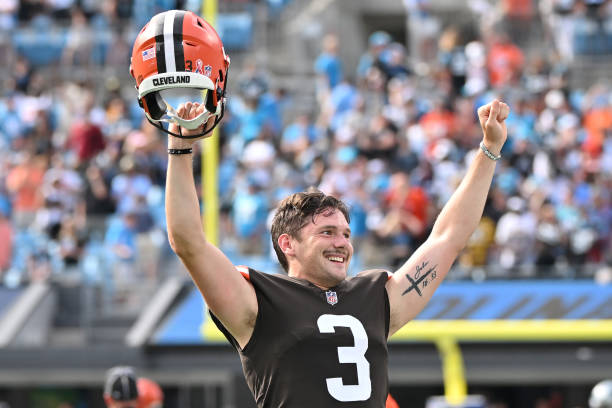 The Cleveland Browns won their first regular season game of the year for the first time since 2004 with a 26-23 win over the Baker Mayfield-led Carolina Panthers. Cade York, LSU’s kicker for three years and fourth round selection by the Browns, converted a 58 yard field goal with eight seconds on the clock for the winning margin at Bank of America Stadium in Charlotte.

Nick Chubb led the way with 141 yards on 22 rushing attempts. Kareem Hunt scampered for a score and caught a nice ball by Jacoby Brissett for a TD. Brissett and the offense looked rusty at times and dominating at others. He was 18 for 34 for 147 yards with 1 touchdown. He managed the game well enough for the win. 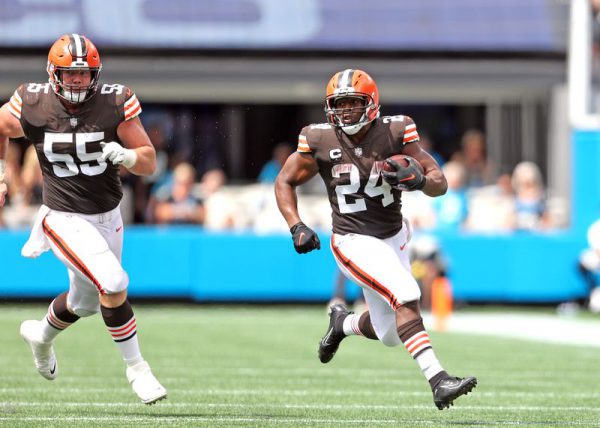 Brissett’s timing was off with the receivers especially the second half where the Browns struggled to move the ball into the endzone. As dominating as the defense looked the first half, the second half saw communication breakdowns and long gains over the safeties heads. And forgetting the near catastrophe from a dropped punt by Demetric Felton JR, the special teams won this with the York field goal.

The early line on the game was the Panthers, quarterbacked by former Brown Mayfield, favored by -1.5 points. It had been -3 early in the week. Mayfield’s day was eerily similar to his play four years in Cleveland. At times his performance was brilliant, like the TD pass to Temple’s Robbie Anderson or the decision to run into the endzone to cut the Browns lead to 20-14. 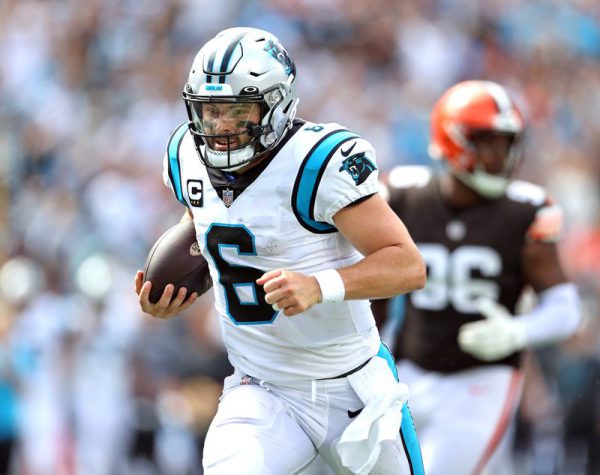 But for much of the first half, the 73,778 fans in attendance and the TV viewers saw why the Browns jettisoned the former Oklahoma star during the summer: tipped balls, dropped snaps, an interception, four sacks and shoddy footwork leading to poor passes. Christian McCaffrey was back on the field after two injury plagued years and accounted for 57 yards of total offense with a touchdown run. 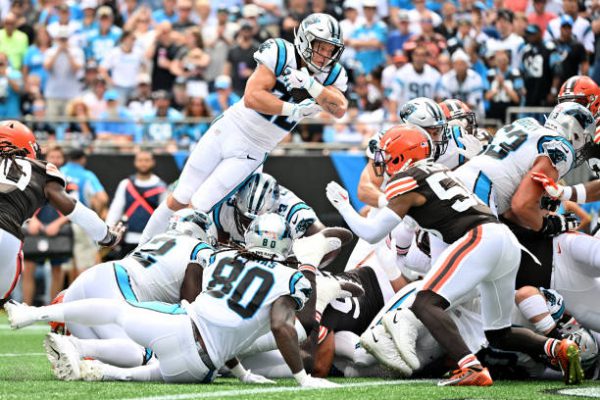 CHARLOTTE, NORTH CAROLINA – SEPTEMBER 11: Christian McCaffrey #22 of the Carolina Panthers leaps for a touchdown during the second quarter against the Cleveland Browns at Bank of America Stadium on September 11, 2022 in Charlotte, North Carolina. (Photo by Grant Halverson/Getty Images)

But through it all, Carolina was poised to win the game with a field goal by Eddie Pineiro from 34 yards out with 1:13 left in the game that pushed them to a 24-23 lead. The Browns needed to bleed the clock prior to the Panthers taking their first and only lead of the game, but facing a 3rd and 9, Brissett couldn’t get the ball to Donovan Peoples-Jones (6 completions for 60 yards on 11 targets) and the Browns punted.

After the kickoff, the Browns, behind Brissett and a roughing call, made their way down the field and got to the 40 yard line for York’s winning kick. As they moved the ball, DPJ had a big first down catch for 13 yards and newcomer, Amari Cooper (3 catches 17 yards), had a key nine yard reception to get the ball to the 40.

“Honestly, I had the worst warm up in my life today.” – Cade York

The Browns had an early fourth down and short in the first quarter, but opted to go for it and forgo the field goal. Cade mentioned in an interview with Aditi Kinkhabwala that the club was not electing to try the kick because they didn’t want his first kick to be a long one.

“Honestly, I had the worst warmup of my life today.”

In his first NFL game, Cade York overcame his nerves and hit the game-winner for the @Browns in Carolina. (@AKinkhabwala) pic.twitter.com/3HUcRHDHFK

Odd how he also mentioned how poor his warmups were prior to kickoff. “That’s when I was more nervous.” But he was able to focus on connecting all four field goals he attempted on the day, when so many NFL kickers struggled in Week 1. 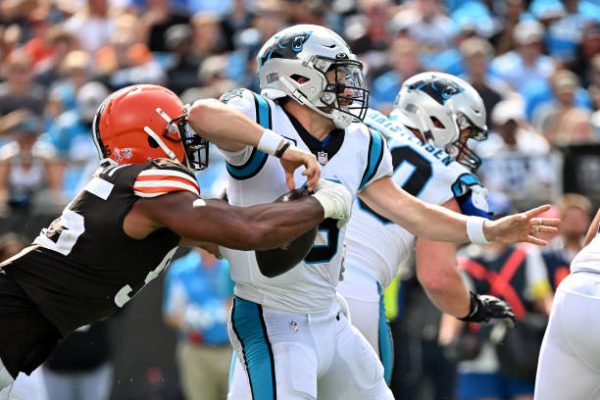 Myles Garrett said in his remarks after the game that it was “great to see them [offense] come in clutch when we needed to.” 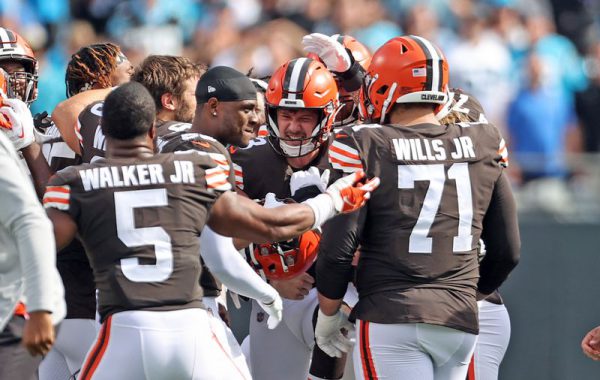 Jacoby Brissett had an emotional press conference. He started by talking about how hard York works during preseason. “We trusted Cade. We’ve seen him do it a bunch during practice. And he came through for us.” If Cade was nervous during warm-ups, Brissett was emotional, too.

Fighting back tears, he mentioned that “I’ve got to do a better job at calming those emotions down” in discussing how grateful he was to being the starting QB for this team in Week 1 and how amped the offense was the first few series.

But he also shared how at a practice early in the preseason, Cade York, with great confidence, told Jacoby, “Just get it to the 40!” Even coach Stefanski mentioned that same thing in his remarks.

starting off the season 1-0 and on to the next one pic.twitter.com/OUReaHKDTz

Cade responded to these quotes:

“Yes. I said that before our rookie dinner [in May].” But Cade also mentioned that the rookies have ten development meetings/dinners throughout the year to share their thoughts. Their first one was this past Monday. And at that meeting they talked about being the class that would help the Browns win their opening, Week 1 game, something that hadn’t been done since 2004.

He was also asked if on Saturday night did he envision what might transpire for him on Sunday. “I didn’t think I’d have a career long for a game winner.” But he did have dad, his step mom and family friends in the stands for the game watching the game winner.

The Browns will host the New York Jets at FirstEnergy Stadium at 1PM. There aren’t many tickets left but those that are you can purchase here.

And for the first time in 14 years, the Browns have a chance to go 2-0 to start the season! Wow!

Do the Browns Have a Chance to Win Their First Season Opener Since 2004?
Cleveland Browns vs. New York Jets: Week Two Preview