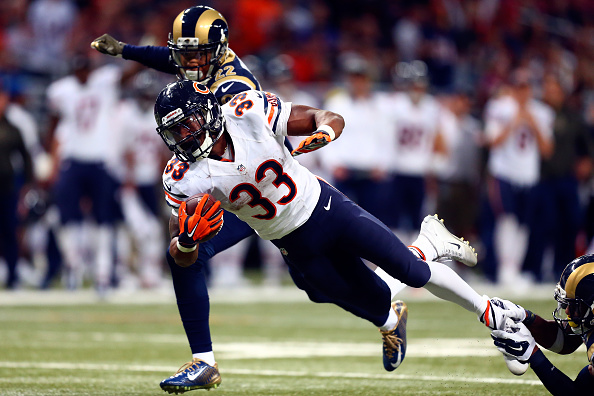 Now on a winning streak, the Bears are third in the NFC North behind Minnesota and Green Bay. Tight end Zach Miller, after his game winning one-handed TD catch a week before, had himself another game catching the ball ending with 5 catches – 107 yards – 2 TDS. Also, rookie running back Jeremy Langford finished with 7 catches for 109 yards and receiving TD as well as 73 yards on the ground and a rushing TD.

From a winning streak to a losing streak, the Rams are struggling with consistency. This team’s Achilles heel would have to be the poor performance of Nick Foles so far this season. With a QB rating of only 75.9, Foles will need to step up his game if the Rams would like to be in the post season conversation.

A strong team victory for the Dolphins this past week against Philly. The defense was stifling, tossing the O-line of the Eagles out of the way on just about every drop-back, ultimately taking Sam Bradford out of the game with an injury. Miami will see the return of Tony Romo when the Cowboys visit this upcoming week.

It seems that Jamies Winston has found out that Mike Evans is quite dangerous. The duo hooked up for 8 catches and 126 yards in the 10-6 W over the Dallas Cowboys. Scoring the only TD on a play-action QB keeper on the goal line, Famous Jamies and the Bucs improve to 4-5 on the season.