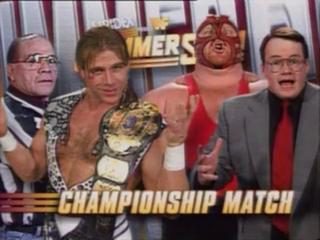 CLEVELAND, Ohio – WWF Summerslam 1996 took place on August 18, 1996, at the Gund Arena in Cleveland, Ohio. It was a card that had a lot to prove and a lot of cards stacked against it.

Three of the four biggest stars in WWF had just left earlier in the Summer. Kevin Nash and Scott Hall leaving for WCW to form the NWO didn’t help matters, neither did Bret Hart taking his summer off to think things over. The Ultimate Warrior was also counted on to provide star power, but then he got fired in July.

This left a depleted roster to step up and fill the void. The WWE still had Shawn Michaels however, and they used him in the main event as he defended his title against Vader. The original plans called for Vader to win, but backstage politics go in the way, and HBK walked away with the pinfall victory.

Elsewhere on the card, it was very lacking for memorable moments, but one that has stood the test of time was the Boileroom match between The Undertaker and Mankind. It saw the epic turn to evil from Paul Bearer as he turned against The Undertaker, ending their six year long relationship.

On the pre-show, Stone Cold Steve Austin beat Yokozuna when the ropes collapsed from his massive weight. Elsewhere on the main card, Savio Vega was defeated by Owen Hart with a cast to the head. Sable assisted Marc Mero to the ring, but he would lose to Goldust with Marlena as Mankind interfered. The British Bulldog was also decimated by Sid.

Other than that, not much to speak of in this clunker.