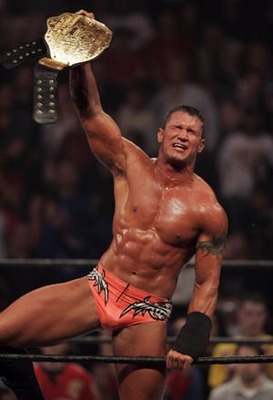 The 2004 WWE Summerslam was a god mix of good and bad as it had a few highlights, and other matches that just made you scratch your head.

The night’s main event featured the very young Randy Orton upsetting Chris Beniot to win his World Championship with a well timed RKO. The win was shocking and brought an end to the very short reign of Beniot, who would never again hold the belt.

Orton, would go on to lose the title just a month later to HHH. Speaking of The Game, he won his match against the fleeting sensation of Eugene, Uncle Eric’s handicapped nephew. The match was about exciting and strange as it sounded.

This event also featured the one and only episode od Diva Doge ball as the veteran divas on the roster took on the contestants from the first ever Diva Search.

Chris Jericho took and hometown boy Edge and Batista in a match for the IC belt. Edge managed to hang on and retain the belt.

In the best match of the night, it was Kurt Angle once again shining at a Summerslam as he defeated Eddie Guerrero in the third match of their epic trilogy.

WWE Champion John “Bradshaw” Layfield (c) (with Orlando Jordan) defeated The Undertaker by disqualification to retain the belt. The highlight came after the match when Undertaker drove JBL with a thunderous choke slam, right through the top of a limo.

The 2005 edition the following year, would put this one and most others to shame…..

FLASHBACK : 2003 WWE SUMMERSLAM
OFF THE TURNBUCKLE: McGregor May Be Interested in WWE, Challenges Entire Locker Room