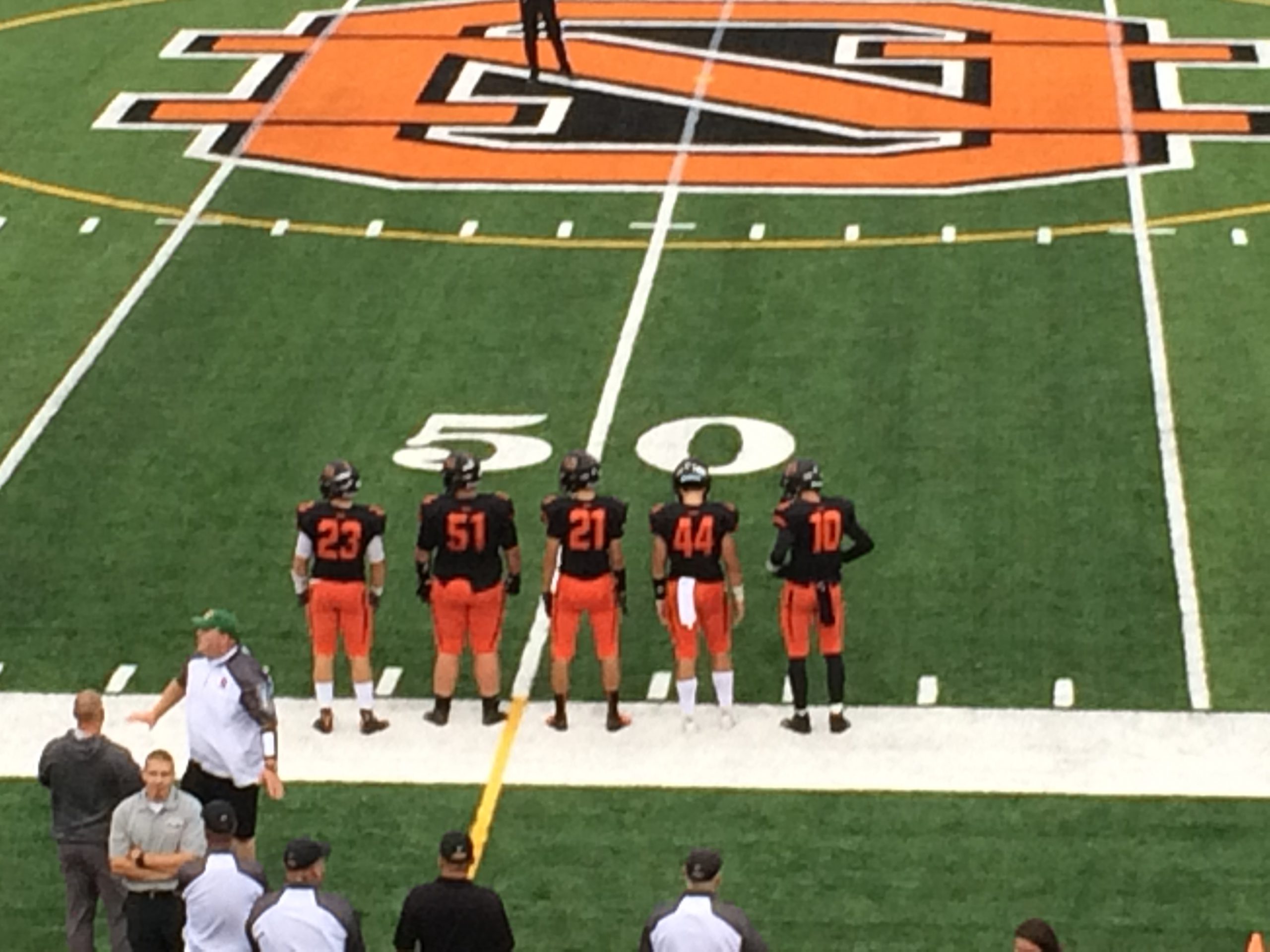 This game recap is brought to you by Frankie’s Italian Cuisine.  Present this article for 10 percent off your next purchase.

North  Olmsted had a chance early, Liam Fay threw it deep to Darren Anders and the ball slipped just out of his fingers in the end zone.  On the next drive, Midview had it at North Olmsted’s 24-yard line on third-and-goal.

Andrew Gooch connected with Isiah Johnson for the score but the extra point was failed.  North Olmsted started their next drive with great field position after a poor punt from Andrew Gooch that set up North Olmsted with first-and-ten at the Midview 30 yard-line. A 22 yard run from Darren Anders set up Liam Fay for a one-yard touchdown carry to give North Olmsted the 7-6 lead.

Midview had North Olmsted ready to punt after Fay threw an incomplete pass on third down. A roughing the passer penalty against the Middies kept North Olmsted’s drive alive which would result in a three-yard touchdown run for Darren Anders to give North Olmsted the 13-7 lead after a failed extra point.  Anders finished the game with 167 yards on 26 carries and scored three times.

Midview took over on their own 23-yard line with 5:56 left in the half.  The Middies would need all of that time on the drive. It looked like the Eagles were going to have good field position to take a two-score lead before the half after Anthony Guercio intercepted a pass from Andrew Gooch and had a long return down to Midview’s 15-yard line.  The interception was negated with a roughing the passer giving the Middies the ball back with a fresh set of downs. Midview scored with twenty seconds left in the half after Andrew Gooch hooked up with Seth Sanders for a 12-yard touchdown pass to tie the game up at 13 before halftime.  The drive laster 5:36 and went for 77 yards and had the help of seven North Olmsted penalties on the drive.

North Olmsted came out fast in the second half as it only took the Eagles one play to score.  Liam Fay threw a screen to Owen Juhn who outran everyone for a 62-yard touchdown which gave the Eagles a 20-13 lead.  Midview punted and gave it back to the Eagles who capitalized three minutes later on a nine-yard run from Darren Anders giving the Eagles a 27-13 lead.

In the middle of the fourth quarter, it looked like it might be over. Midview had it on their own 45-yard line on third down.  The Middies ran a double reverse to Isiah Johnson that went all the way to the house for a touchdown to cut the score to 27-20 with 6:22 left in the game.  The Eagles got the ball back but punted three plays later. A 59-yard punt from Owen Juhn pinned the Middies inside their own ten-yard line it looked like the Middies were driving after a 31-yard pass from Gooch but a botched snap put the Middies back 20 yards.  The Middies were forced to punt with 2:41 left in the game. The Eagles turned it over and gave Midview the ball back at the 41-yard line.

On fourth and two, Gooch was almost sacked but managed to get the ball off.  It was tipped in the air and caught for an 18 yard gain. The next play, Andrew Gooch threw for a 34-yard touchdown pass to tie the score at 27 with under a minute left.  North Olmsted took the ball with 34 seconds left in the game at their own 37-yard line. After two completions, the Middies got called for roughing the passer. The Eagles got the ball at the 32-yard line of Midview.  A completion to Dalton Diaz gave the Eagles a chance to try a field goal for the win with just four seconds left in the game. Shane Cairns 40 yard attempt was partially blocked and the game headed to overtime.

The Middies started overtime with the ball.  On fourth and three, the Middies opted to kick a field goal.  The field goal was blocked by the Eagles setting up the Eagles with a chance to win the game.  Darren Anders ran the ball in for a touchdown on the first play of the Eagle’s drive giving the Eagles the 33-27 win.

“It was 37 counter gap,” said Anders about the final play of the game.  “Tyler [Jones] pulled, I knew to get behind him, I saw the space.  I broke a tackle and I knew I had to score, I had to do it.”

Darren Anders was the player of the game, he found the end zone three times for the Eagles and rushed for 167 yards.