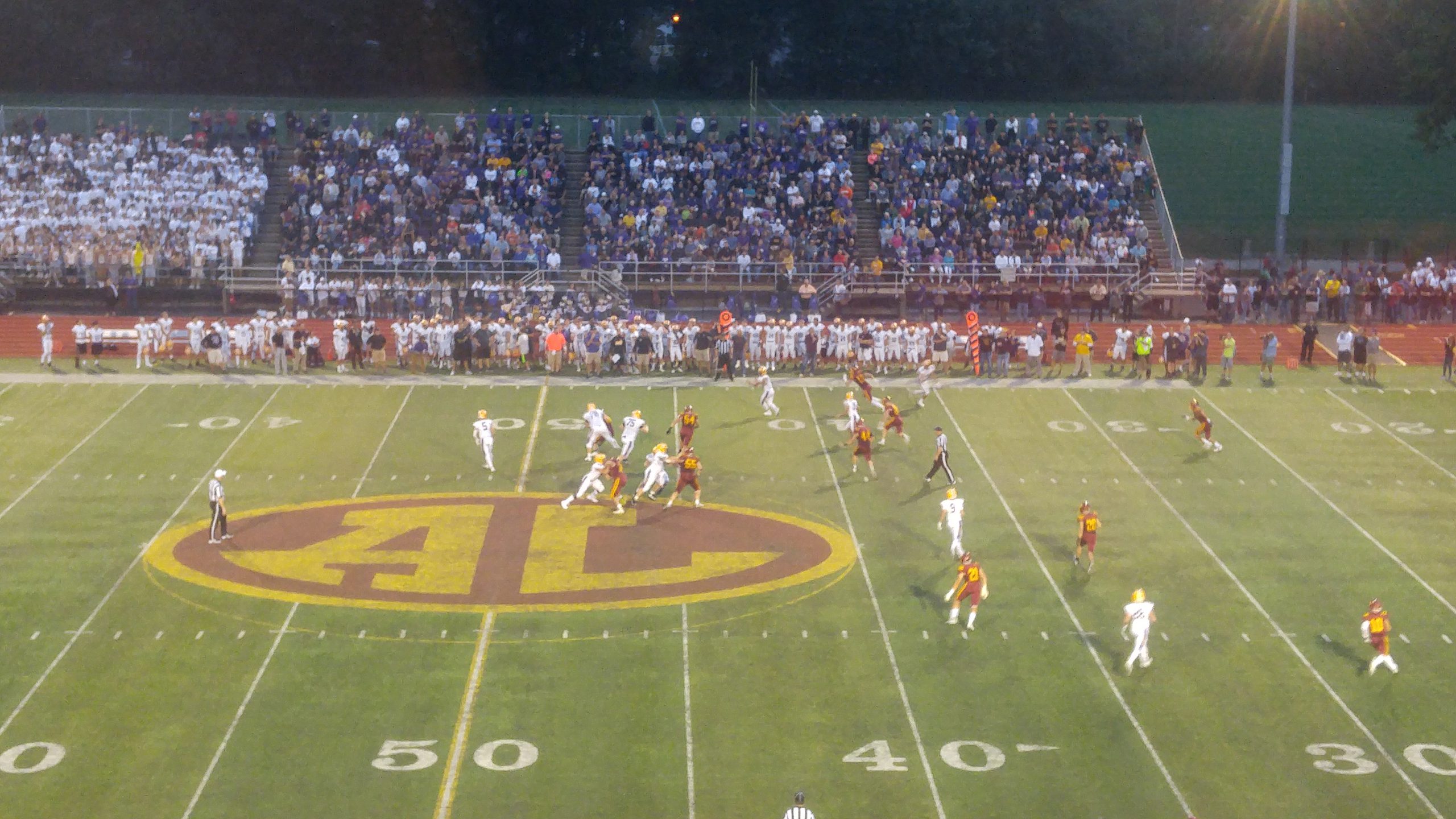 Avon Lake scored on a Jack Mikolich quarterback sneak with 30 seconds to go to lead the Shoremen 31-28 over the Avon Eagles.  Avon had overcome a 24-14 deficit with under 4 minutes left, to comeback and almost shock the Shoremen 28-24, but they left two minutes on the clock, and the Shoremen rallied in dramatic fashion.

Konnor Riggs had a big night once again, finishing with 180 yards on 32 carries. Riggs was a key factor on every Shoremen touchdown drive tonight. Avon Lake head coach Matthew Kostelnik talked about what makes Riggs a special player leading to the big victory tonight.

“The kid puts so much time in during the offseason and is committed to getting bigger, stronger and faster.  He has the “it” factor you look for in a running back.  He does a good job seeing the hole as well and responding very well to the tweaks we made in the offseason.

Also, the big guys upfront blocking for him have done a tremendous job.  They truly play for him and we love the guys up front, I love their leadership.  It just has been awesome to see, and we saw that tonight.”

Riggs wasn’t the only Shoremen to have a big night, as they also received solid quarterback play out of Jack Mikolich who finished with 3 touchdown passes, on 15 of 26 passing for 215 yards.  He also had two touchdown passes called back on penalties.  He had the winning touchdown with his feet as well.

Avon Lake started the game on the Avon 40-yard line after a short punt on the Eagles opening possession.  After a first down, they had to settle for a 43-yard field goal by Harry Hebert.

The Eagles would switch to the hurry up offense on their next possession.  It worked well as they wasted no time in answering the Shoremen score with a 1-yard Mark Steinmetz touchdown rumble.  The score was set up after a key fourth down and 10 conversation on a Steinmetz catch.

The Shoremen were backed on the strong legs of Konnor Riggs, who dominated the Eagles defense on the ensuing drive.  Riggs had 4 carries of 8 plus yards each on the drive to put his team in the red zone.  The only pass on the drive would lead to the touchdown, as Jack Mikolich hooked up with Nathan Sidloski from 18 yards out to score and give the Shoremen the lead 10-7 as the first quarter ended.

After another impressive defensive effort by the Shoremen that forced the Eagles to have a 3 and out, they had two separate touchdown passes called back due to penalties.  The third would be the charm as once again it was Mikolich connecting with Sidloski for pay dirt.  This time it was a strike from 29 yards out to give them the 17-7 lead midway through the second quarter.  The half would end by that same score.

A scoreless third quarter would set up for a dramatic fourth quarter.  Ryan Maloy would not go down easy as he scored on the opening play of the quarter, with a beautiful 5-yard run that saw him spin off several tacklers.  The scamper cut the Shoremen lead down to 17-14.

The hopes of an Eagle comeback appeared to end shortly after however as Mikolich launched another touchdown pass.  This time a 46-yard bomb to Luke Fedders to put the game out of reach at 24-14 with 8 minutes to go.

The Eagles would have a last-ditch effort, as Steinmetz powered his way down the field, racking up over 50 yards on one drive to find the endzone again.  The Steinmetz power attack cut the Shoremen lead to 24-21 with 3:35 to go.  Steinmetz who received extra carries in place of the injured Nick Perusek finished with 108 yards and two touchdown runs.

In shocking fashion, the Shoremen fumbled the kickoff, giving the Eagles one last chance.  Maloy and the boys didn’t waste it.   A few players later it was Maloy hitting a wide-open Joey Allen to put the Eagles up 28-24.  A lead everyone may have thought was safe, before the last second dramatics of the Shoremen.

This continues to be one of the most heated and important rivalries in the SWC.  Avon head coach Mike Elder touched on that pregame.

“It’s a rivalry built off respect with tremendous history.  They were the type of team we aspired to be years ago and it’s built this great rivalry.  This is why our kids play football, for this atmosphere and games like tonight.”

Avon Lake Shoremen head coach Matthew Kostelnik is only in his second year at the helm, but also understands the importance of this rivalry.

“It’s a great and healthy rivalry, we just need to get the Shoremen back in the win column more often.  The kids love it, they buy into it and look forward to it every year.  It is just an exciting time around our community!”

Player of the game is Jack Mikolich with 215 yards passing, 3 touchdown passes and 1 running.