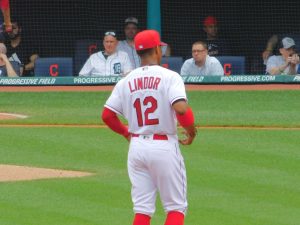 It’s safe to say the Indians are ending this nine-game homestand on a high-note. After dropping two straight to Minnesota last Friday and Saturday, the Tribe has rattled off seven straight wins before they head out on a nine-game road trip.

But Cleveland didn’t just win these games– they had plenty of blowouts along the way against American League Central opponents.

They have scored four or more runs in all of those wins, two of which were double-digit shutouts. With Sunday’s win, three have been double-digit victories for Cleveland.  Just against the Tigers through three games, the Tribe overpowered them 26-3.

The last time the Tribe won this many games in a row was, you guessed it, last year’s 22-game win streak.