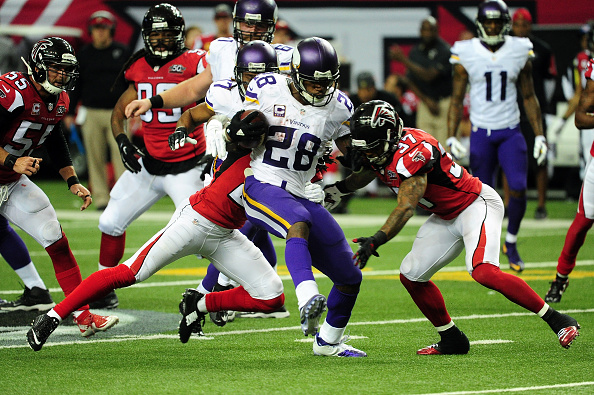 6. MINNESOTA VIKINGS (7) 8-3
Thanks to the Bears, and a strong victory, the Vikings are now the leaders of the NFC North. The game plan seems to be pretty simple week-in/week-out – give the rock to Adrian Peterson (29 carries, 158 yards, 2 TDs.) In a division such as this one, running the ball will be a key to post-season success and the Vikings have a leg up in that regard.

7. GREEN BAY PACKERS (6) 7-4
Ouch. That loss stung for Green Bay. Finishing at a 51% completion rate, Aaron Rodgers was unable to push pass the Chicago Bears and the Packers have now dropped 3 out of the last 4 games played. Staying within the NFC North Green Bay will take on the Detroit Lions, who lit up the Thanksgiving Day scoreboard against Philly a week ago.

8. SEATTLE SEAHAWKS (10) 6-5
Perhaps the most impressive of the 6-5 group, the Seahawks are making some more noise. Russell Wilson: 21/30 – 345 yards – 5 TDs. An old fashion shoot-out this past week and Seattle sneaks their way back into the Top 10. Tough test for Week 13 as Pete Carroll will take on the Minnesota Vikings.

9. PITTSBURGH STEELERS (8) 6-5
In a game dominated by the passing game, Ben Roethlisberger answered the call to arms passing for over 450 yards in the thriller against the Seahawks. Unfortunately, it wasn’t enough to hold off Seattle and the Steelers lose ground in the AFC North that will most likely crown the Bengals as division champions.