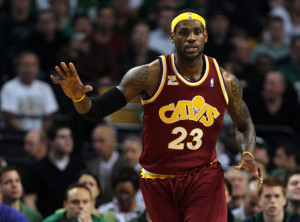 No player, not even a concerted effort of an entire team, can stop LBJ. It’s possible to contain him. Leonard, Iguodala, and Jimmy Butler have shown that at times you can slow him down, but that’s the best hope any team can have. Just slow him down.

LeBron is nearly as dominant now as any of his four MVP seasons. His scoring is down just a little, averaging 25 points per game, which is fifth in the NBA. His 7 rebounds per game is tied for third among small forwards and he leads all small forwards in assists, averaging 6.4 per game. The Cavs are the number one team in the Eastern Conference and although it’s a small sample-size, LeBron dropped 29 points while being guarded by the league’s best one-on-one defender, Leonard. Just another indication that no matter what you do, it’s impossible to stop the L-Train.

That’s it for today’s installment of the “Write Down Euclid 2015-2016 NBA Mid-Season Rankings and Awards.” Come back tomorrow when we rank the shooting guards!