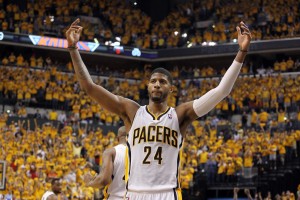 Comeback Player of the Year. Without a doubt. What a great story George has been this season. He got out to an insanely hot start, cooled off somewhat, but is still one of the best players in the league this season, at any position. P.G. is averaging 23.5 points, 7 rebounds, and 4 assists per game, which is top three in each category among small forwards.

It was hard to predict how George would bounce back from his horrific injury that sidelined him for the 2014-2015 season, but very few people could have expected this tremendous of a comeback. George is carrying the Pacers to a potential playoff-berth and is one of the best two-way players in the league, leading all small forwards in steals, averaging 1.9 per game.