The Cavs hosted the San Antonio Spurs for the second and final meeting between the two teams of the regular season on Saturday night at Quicken Loans Arena.

The Spurs were without Tim Duncan, but the Cavs looked unstoppable, pulling through with what will be viewed as a “statement win” by a final score of 117-103.

Cleveland looked to avenge a 99-95 loss from their January 14th meeting in San Antonio and the Cavs got out to a good start, taking a 10-4 lead in the opening two and a half minutes.

Kevin Love scored 14 points in the first quarter and J.R. Smith hit a deep two-pointer at the buzzer to make it 37-30 in favor of Cleveland heading into the second quarter.

Cleveland’s 37 points was the highest-scoring quarter San Antonio has allowed in the 2015-2016 season.

The Cavs started the second quarter on a 9-2 run and would maintain a comfortable lead all the way up to halftime, heading into the break with a 66-49 lead, as Cleveland matched their season-high for most points in a first half, which coincidentally they equaled on Friday night in Detroit.

The Spurs came out of the gate hot to start the second half, going on an 8-0 run in the first three minutes, but the Cavs bounced back after starting the half 0-for-4, and got it back to a 15-point lead with 7:07 to play in the third quarter.

LeBron James scored 16 points in the third quarter after a quiet first half, in which he scored just eight points, and the Cavs would lead 92-76 heading into the fourth quarter.

Matthew Dellavedova had a huge fourth quarter for Cleveland, scoring ten points, and finished the night with 15. The Cavs would stay in control to close out the game and win 117-103.

Love posted his 22nd double-double of the season, putting up 21 points and 11 rebounds. 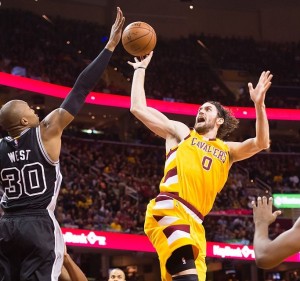 Kyrie Irving scored 21 points, ten of which came in the fourth quarter.

Tony Parker finished with 13 points and dished out six assists.

The first time the Cavs and Spurs met this season on January 14th in San Antonio the Cavs got out to a great start, leading by six at halftime, but the Spurs outscored Cleveland 55-45 in the second half.

The Cavs didn’t make the same mistakes on Saturday night, as they held on to win by 14.

What a Difference a Week Makes

Exactly one week ago, the Cavs played the Chicago Bulls on ABC in the Saturday night game of the week. It was Tyronn Lue’s head coaching debut, and Cleveland got booed off the floor as they were embarrassed by Chicago. Questions loomed over the Cavs decision to fire David Blatt, and those who opposed the move had more fuel from the blowout loss.

This Saturday night against San Antonio, Quicken Loans Arena was a party atmosphere all night. The Cavs are now 4-1 since Lue took over as coach and the offense is looking better than ever.

Take it a step further, when the Cavs and Spurs met 16 days ago it almost seemed like neither of those teams were the same as the ones that showed up on January 30th in Cleveland.

The Cavs extend their win-streak to four games with the victory and improve to 34-12 on the season. The Spurs fall to 39-8 with the loss. Next up, the Cavs travel to Indiana to take on the Pacers Monday night. Tip-off is set for 7 PM.