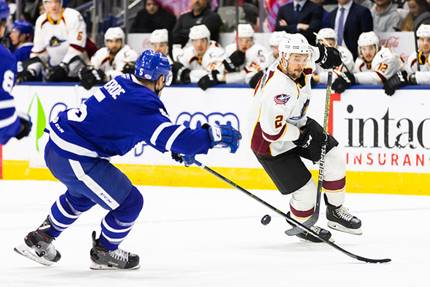 The Monsters were defeated by the Toronto Marlies on Saturday at Toronto’s Coca-Cola Coliseum by a final score of 3-2. With the loss, the Monsters are now 27-25-6-1 overall this season and with 61 points, remain alone in sixth place in the AHL’s North Division standings.

The Marlies claimed a 1-0 lead at 1:55 of the first when Josh Jooris connected for a five-on-five finish before Adam Brooks made it 2-0 for the home team with an even-strength strike of his own at 12:56.

In the second, Toronto pushed their lead to 3-0 with an even-strength Tanner MacMaster marker at 17:03 but early in the third Cleveland’s Adam Clendening put the Monsters on the board with a five-on-five conversion at 4:14 with Mark Letestu and Justin Scott collecting assists on the play.

Zac Dalpe drew Cleveland within a goal at 13:43 of the third with an even-strength tally set up by Ryan MacInnis, but the Marlies held on for a 3-2 victory.

Cleveland goaltender Brad Thiessen stopped 25 of the 28 shots he faced to fall to 5-4-1 this season while Toronto’s Michael Hutchinson improved to 10-6-5 in net this year by virtue of a 34-save performance.

Next up for the Monsters, it’s a Thursday home clash vs. the Belleville Senators with full coverage, live from The Q, underway at 7:00 pm.

Big Crowd at the Q Watches the Monsters Skate Past Laval Rocket 4-1
Do You Like the New the Reported Name Change of the Q to Rocket Mortgage Fieldhouse?