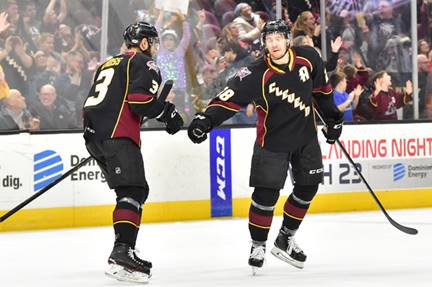 The Monsters defeated the Laval Rocket on Friday at The Q by a final score of 4-1 in front of 10,135 fans.

With the win, the Monsters are now 27-24-6-1 overall this season and with 61 points, remain alone in sixth place in the AHL’s North Division standings.

The Monsters grabbed a 1-0 lead on Friday with the first period’s lone score, a Zac Dalpe power-play strike at 16:17, made possible by Adam Clendening’s lone assist.

In the middle frame, the Rocket leveled things at one goal apiece when Jake Evans posted a shorthanded tally at 13:05, but just 43 seconds into the final stanza, Cleveland’s Mark Letestu scratched home an even-strength goal that made it 2-1 Monsters with Paul Bittner and Dan DeSalvo posting assists on the play.

Cleveland added two more tallies, both empty-net scores, with Justin Scott striking at 18:09 of the third on feeds from Dalpe and Letestu, and Dalpe converting at 19:27 of the final frame in unassisted fashion to seal a 4-1 Monsters victory.

Cleveland goaltender Brad Thiessen stopped 22 of the 23 shots he faced to improve to 5-3-1 this season while Laval’s Michael McNiven fell to 9-7-2 in net this season by virtue of a 27-save performance.

Next up for the Monsters, it’s a Saturday road clash vs. the Toronto Marlies with full coverage, live from Coca-Cola Coliseum in Toronto, ON, underway at 5:00 pm.