Mat Insiders: NXT Main Even Ends in Controversary; a Surprise Return Earlier in the Night 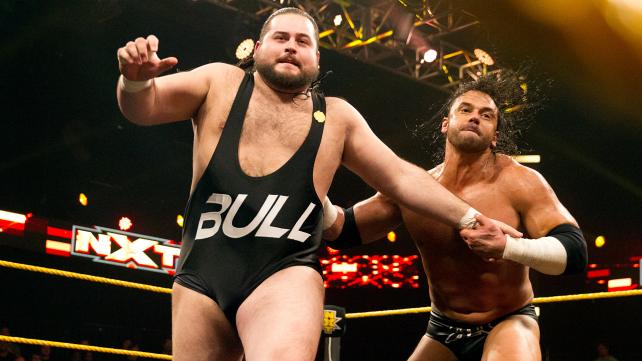 A quick look back at Wednesday night’s NXT:

Are you Ready, Willing, and Gable? I am. Blake and Murphy have lost all moment since losing the tag team championships a while back. Love the fact that American Alpha has a wresting background , as in collegiate and Olympic. The Gable chants in the tone of Kurt Angle “You Suck” are another thing on my list of favorites. I know this is early, but the potential of Jordan and Gable on the main roster excites me. I remember when I went to my first NXT show, Jason Jordan got Maven chants. He is proving himself and is a fantastic athlete. Kurt Angle as the manager sometime would be fantastic.

For one I hate the fact that Eva Marie is still in this company. The fans down in Full Sail (where NXT takes place regularly) hate her. Moving on to Nia Jax , she does not impress me one bit. I believe Jax is only in NXT because she is related to the Rock. Jax is more than likely going to be the replacement for Kharma.

Enzo and Cass have improved a ton since I first started watching NXT. Amore always uses word play and I love it. How You Doin!?

Well if Big Show ever decides to retire they can have a carbon copy in Bull Dempsey. Surprise return by Alex Riley, something WWE doesn’t do to often. I wasn’t expecting Riley. Impressive showing by Riley.

WINNER: Alex Riley
The post match promo by Riley was fantastic and I love the fact that NXT incorporated his surprise return into a storyline.

I love the Drifter character/gimmick Samson has. It’s unique and fits him… for now. Samson has a sickening neckbreaker as a finisher.

If anyone out of these competitors are main roster ready heading into this match , it has to be Sami Zayn. Zayn’s WWE debut proved that he is ready and I firmly believe that if he wouldn’t have got hurt he would have been in the same position as Kevin Owens, but as a face. I’ve said it before and I’ll say it again, Sami can play the role of the ultimate underdog. Coquina Clutch by Joe seems so deadly, please never put me in that. The most disappointing thing about Zayn is his finisher the Helluva Kick, it’s not the best but it fits him. I can’t complain to much because remember a leg drop was once a finisher.

Sami Zayn had a sharpshooter locked in and Joe applied a crossface to Corbin and Corbin tapped. Exactly why NXT is unique and has its own twist, you never see that on RAW do you?

WINNER: undecided, under review
Looking like it will be a triple threat for the NXT championship but we will have to wait and see till next week.