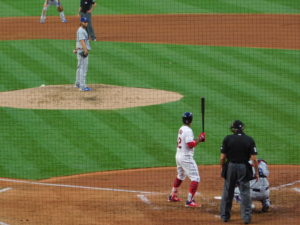 In a line-up without Carlos Santana, Jason Kipnis, Michael Brantley and Lonnie Chisenhall, the Indians struggled to get any offense going on Wednesday.

Cleveland went 3-for-30 from the plate as a team. Edwin Encarnacion recorded the Indians’ lone run of the night on a homer to left field in the bottom of the eighth inning.

Brandon Guyer and Jay Bruce recorded the only other hits of the game for the Tribe.

The Indians had just two runners in scoring position all night, and ended up with eight men left on base as a team. All in all, for the second straight night a lack of offense was ultimately the Tribe’s undoing.