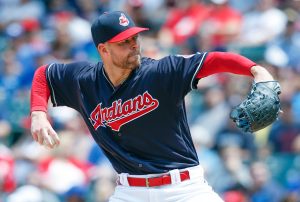 During Kluber’s start last Friday in Kansas City, he left after five and one-third innings due to an ankle sprain.

On just four days’ rest, however, Kluber looked to be back in peak strikeout form on Wednesday night.

Kluber pitched seven and two-third innings, giving up four hits, two earned runs, and one walk. He recorded 12 strikeouts in the process.

Despite the loss, Kluber still made some history.

After striking out the side in the second inning, Kluber recorded his 200th strikeout of the 2017 season. It is the fourth year in a row he has struck out at least 200 batters, and Kluber joins Bob Feller (1938-41) and Sam McDowell (1965-70) as the only Indians pitchers to accomplish this feat.

Kluber has now struck out 10 or more batters 13 times this season, and 37 times in his career. The 13 times in a single season is tied for second most in franchise history.

He has also made it 14 consecutive home starts with at least eight strikeouts. His current streak is tied for the second-longest all-time with Pedro Martinez (1997-98) and Nolan Ryan (1973). The only streak longer than Kluber’s is a 15-game stretch by Dodger’s great Sandy Koufax in 1965.