Browns Players Speak Out on the Release of Linebacker Paul Kruger 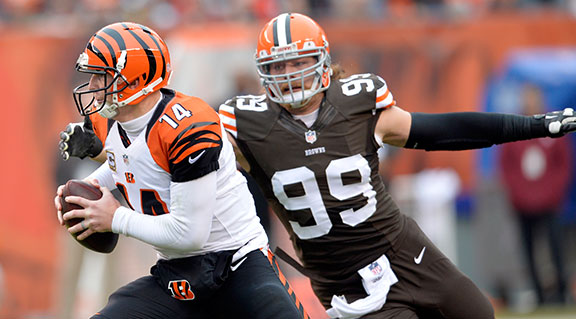 The Browns today laid down a rather shocking release, as the team terminated the contract of veteran linebacker Paul Kruger, who was inked to a huge free agent deal in 2013.

Kruger blasted the team when he was released, saying it wasn’t handled in the proper way. His teammates spoke out for the first time Monday about the linebacker being let go.

“It was a shock. This business, it never surprises you,” cornerback Joe Haden said.

“You always have one or two [players] every year that you kind of scratch your head or it is a dude that you thought that was going to be part of the change, but it’s a business. It’s a tough business.

My relationship with Paul, that’s one of my best friends on the team. HE is a really good dude, and it just happened to go that way. It was definitely a surprise, but things like that happen every single year.”

One thing that will be missed about Kruger is his leadership, and Haden agreed that it’s one aspect of Kruger’s game that is going to be missed in the Browns locker room.

“Other guys have to step up. I say myself, Double D (LB Demario Davis), (LB) Nate (Orchard), we just have to hold up his end of the bargain,” Haden said.

“Paul was a very good leader on our team, a guy that was vocal and people watched. We just have to know that we have to pick up where he left off and just keep leading these guys. We know there is an opportunity for the younger dudes to step in and make plays. They have been showing flashes on film that they can do it so it’s just an opportunity for everybody else.”

One player that could benefit the most from Kruger’s release is that of Emmanuel Ogbah, and he could see a lot more playing time. He agrees that the leadership of Kruger will be missed this season.

“PK helped me a lot,” Ogbah said. “When I came in, I asked him a lot of questions about certain things and just playing 3-4 outside linebacker. He will definitely be missed but just have to move on.”

Linebacker Nate Orchard is another player that could see a lot more time on the field with Kruger gone. He knows that there’s a number of players, like himself, that have to step up for this young core of linebackers.

“At the end of the day, we have guys that will step up,” Orchard said.