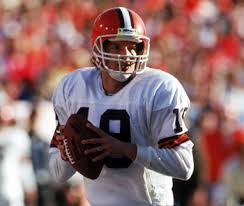 Quarterback Bernie Kosar injured his right (throwing) elbow early in the Browns’ 6-3 season-opening win over the host Kansas City Chiefs, then missed six games before returning for this contest.

Kosar was 25-of-43 passing for 314 yards against the Cardinals. He threw a 3-yard touchdown pass to lineman Rickey Bolden on a tackle-eligible play, and his 29-yard touchdown toss to Reggie Langhorne and Matt Bahr’s 46-yard field goal gave Cleveland a 17-14 halftime lead.

The Browns trailed 21-20 in the fourth quarter but took the lead when Kosar and Langhorne again connected for a score, this one from 25 yards. The Browns capped the scoring when defensive end Charles Buchanan tackled Cardinals quarterback Cliff Stoudt in the end zone for a safety.

The win made the Browns 5-3. They finished 10-6 and earned a wild card playoff berth despite Kosar, Gary Danielson, Mike Pagel and Don Strock all making starts at quarterback and all missing time because of injuries. A knee injury sidelined Kosar for the Browns’ 24-23 playoff loss to the Houston Oilers at Cleveland Stadium.

It was the first season for the Cardinals in Arizona after their move from St. Louis. They were known as the Phoenix Cardinals until 1994. The loss made the Cardinals 4-4. They closed at 7-9.