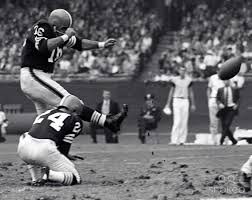 It was just the second game of the season for both teams after opening wins, but its result loomed over the next three months as the Browns won the East Division with a 10-3-1 record and St. Louis finished 9-3-2. The Browns, of course, went on to win Cleveland’s last major professional sports championship with a stunning 27-0 upset of the Baltimore Colts.

The Browns trailed in this game, 30-26, with less than two minutes left when they faced a fourth-and-19 play at the St. Louis 45. Frank Ryan then hit Gary Collins on a deep post pattern for 43 yards to the 2.

Two plays later, Jim Brown swept right end for the touchdown and a 33-30 Cleveland lead with 1:07 to go. The Cardinals got the tie with five seconds left on Jim Bakken’s 28-yard field goal.

Ryan completed 12 of 26 passes for 189 yards. His 40-yard touchdown pass to Paul Warfield put Cleveland ahead 16-13 at halftime, and he connected with Collins for a 7-yard score and 23-23 tie in the third quarter.

The Browns 5 most memorable wins over the Cardinals: