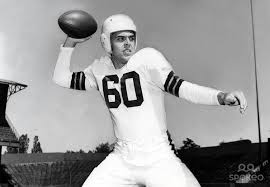 This was a must-win for the Browns and they got it, making them 2-2 and still behind the Philadelphia Eagles (4-0) and New York Giants in the East Division standings. The victory was the first of eight in a row for Cleveland, which won the East with a 9-3 record and then routed the Detroit Lions 56-10 in the NFL championship game at Cleveland Stadium.

Otto Graham had a pair of 1-yard touchdown runs and Maurice Bassett also got into the end zone twice, from one yard and three yards. Graham completed 16 of 24 passes for 182 yards, including a 26-yard touchdown to Dante Lavelli, who caught eight passes for 98 yards.