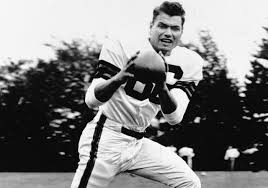 It was the first season in the National Football League for the Browns after they had won the All-America Football Conference championship in all four years of the league’s existence.

This win made them 4-1 on their way to a 10-2 regular season finish and a first-place American Division tie with the New York Giants. The host Browns defeated New York 8-3 in the playoff game for the division and then beat the Los Angeles Rams 30-28 in the famed championship game at Cleveland Stadium.

Browns quarterback Otto Graham riddled the Cardinals defense with 22 completions in 35 attempts for 369 yards, and he ran seven yards for a first-half touchdown.

The Browns, though, trailed 24-10 before Graham threw touchdown passes of 29 and 26 yards to Dante Lavelli for a 24-24 tie in the fourth quarter. Cleveland took the lead on Lou Groza’s 19-yard field goal and closed the scoring on Marion Motley’s 2-yard run.

Lavelli finished with six receptions for 131 yards and Mac Speedie caught six passes for 106 yards. The Browns’ standout defensive end, Len Ford, suffered a broken jaw and broken teeth when he was punched by the Cardinals’ Pat Harder. Ford was sidelined until the championship game, when he wore a protective mask attached to his helmet, one of the first steps toward the modern face mask.

The Cardinals became 1-3 and ended the season 5-7.