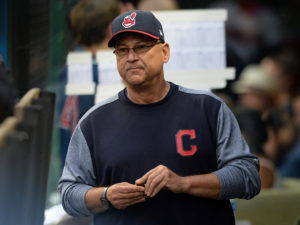 I said it once already and it bears repeating, Tito Francona loves his options all over the diamond, and this squad, when healthy, has plenty of them.

Giovanny Urshela stepped up in a huge way with Jason Kipnis on the DL nursing the hamstring injury.  Urshela proved to be one of the very best at the hot corner in the AL with a lightening quick glove, stopping anything that came his way.  Urshela is a home grown product of the Indians farm system. Don’t be shocked if Kipnis continues to struggle, and Urshela becomes the man at third come post season.

It is no secret that Jose Ramirez is more comfortable at second base and Frankie Lindor has shortstop wrapped up for the foreseeable future.  With that being said, the banged up Kipnis may be the odd man out, despite his home run tonight.  Trust in Tito to make the right call when the time is needed.

That same embarrassment of riches also brings him a bounty of outfielders.  Once again, the key word here is “healthy.”  With a full healthy roster, no one can touch the Cleveland Indians outfield and DH situation.

But, as good as both men are, few can match just how important to the lineup, and how unstoppable they can make it when the pre-mentioned Encarnacion, Brantley and Bruce are all rolling at the same time.  With Dr. Smooth currently hurt, we haven’t seen it yet, but we will soon and it will be GLORIOUS!

Tito proved he can manage with a banged up pitching rotation (last season) and get within one inning away from winning the World Series.  He showed everyone what he could do with a talented and healthy lineup in Boston while managing there winning World Series Titles in 2004 and 2007.

Bottom line, the players love him and will play their tails off for him.  Mix that in with the incredible talent on this roster, and the rest of the MLB needs to be on high alert for the Tribe come October!