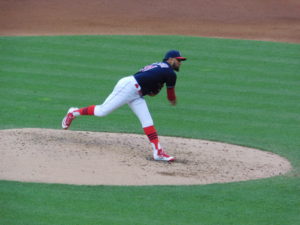 The Resurgence of Danny Salazar bolsters the starting rotation and makes it very dangerous.

It wasn’t that long ago that Danny Salazar was looking like a one hit wonder that couldn’t stay healthy.  The once dominant young stud seemed to be injury prone and not nearly as sharp as he was when he first burst onto the scene with the Indians in 2013.

However, it appears he simply needed time to rest and heal, as he has been better than ever as of late.  He is now 2-0 with a minuscule 1.38 ERA since coming off his latest stint on the DL on July 22nd.  In only 32 innings, he has struck out 46 and looks untouchable.  He was incredible tonight, setting down 13 of the final 14 Minnesota Twins that he faced.

If Salazar continues to pitch this well, the Indians are back to having one of the best, if not the best pitching rotation in the American League.  Trevor Bauer and Mike Clevinger have also been pitching well as of late.

If the two studs at the top of the rotation, Corey Kluber and Carlos Carassco, remain healthy and avoid any injuries the rest of the way, this gives the Tribe an excellent chance to win every three out of five games and really pull away in the Central.  Solid depth in the rotation will also be key in the playoffs as it was lack of depth that crushed them last season when they ran out of gas in October.

One last note on the rotation, a lot of people give Trevor Bauer grief for numerous reasons, but do those same people realize he is tied for the team lead in wins with 11?  Yes, he may be “eccentric” but the guy can flat out pitch!