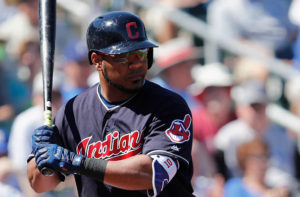 The Batting Lineup is starting to look loaded when healthy!

It’s hard to argue that Edwin Encarnacion is playing his best ball of the season right now.  Edwin has homered in three straight games, and has homered five times in his last five games.  It has bumped his season total up to 27 home runs.  It also appears he is starting to become comfortable in that lineup, and is in line to start crushing the ball every time up.

Encarnacion is heating up at the perfect time after the gigantic addition of Jay Bruce earlier last week.  Any returning World Series lineup that boasts Encarnacion and Jay Bruce as “new additions” can be a very dangerous thing.  If and when both Brantley and Chisenhall get healthy and start swatting again, the lineup becomes an embarrassment of riches.

Imagine having an outfield of Bruce, Brantley and Chisenhall in October, with names such as Bradley Zimmer and Austin Jackson being ready at a seconds notice to come in and pinch hit.  This also gives Terry Francona plenty of options as well, something he is very familiar with and does well.

For a bit, it looked like Carlos Santana may be the odd man out as his season has had its share of peaks and valleys.  However, he also showed great signs of life tonight with Santana going deep twice at Target Field in Minnesota.

Target Field was once a house of nightmares for the Cleveland Indians, not this season!  So far in the 2017 campaign, the Indians have been on a mission, going 8-0 at Target Fieldand outscoring the Twins 56-16.