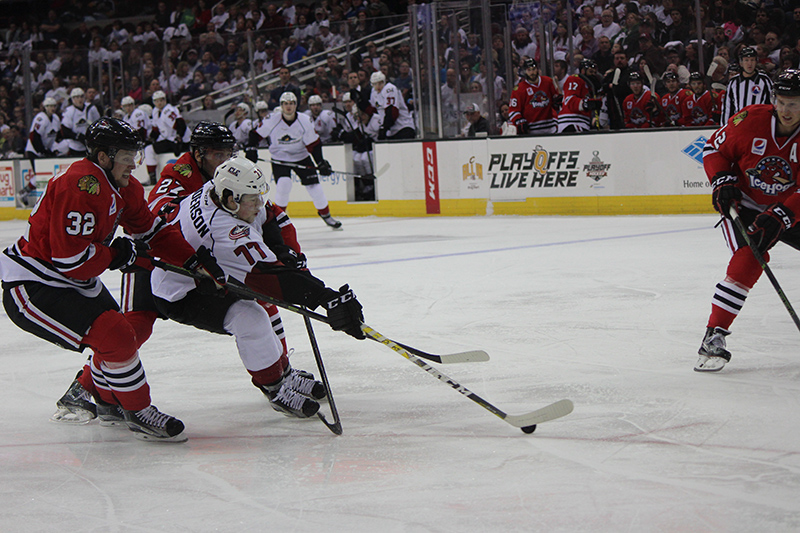 CLEVELAND- Excitement was in the air at the Quicken Loans Arena, as the Lake Erie Monsters look to win their first round match-up against the Rockford IceHogs. 10,025 fans in attendance were on their feet from the beginning of the game and were ready to cheer their hometown team to victory.

The game started off chippy, with both teams trading checks into the glass. The Monsters found a different way to ignite the crowd, as Josh Anderson got the Monsters on the board first at the 9:30 mark in the 1st Period, thanks to a pinpoint pass from T.J. Tynan. Ryan Craig helped set the scoring play in motion, as he became a factor all night. Rockford seemed to be upset with the early deficit they found themselves in, as they traded blows with Monsters players to end the 1st Period. If anything, this fired up the Monsters and their fans.

Zach Werenski got the Monsters fans back on their feet, as he scored a goal at the 7:40 mark of the 2nd Period. T.J. Tynan made his mark felt again, as he was credited for another assist on the goal. Sonny Milano was also credited with an assist on the play. Rockford didn’t go away easily, as Jonathan Carlsson cut the lead in half at the 13:54 mark in the 2nd Period. The scoring play was big for Rockford, as they knew scoring on Joonas Korpisalo was going to be a tough task. Korpisalo had only given up three goals heading into this game. The goal didn’t phase the Monsters fans, who knew that their team just needed one big period to win the game and head to the Second Round of the Calder Cup Playoffs.

Oliver Bjorkstrand was going to make sure that the Monsters had no trouble putting away the IceHogs. Bjorkstrand scored a goal just 19 seconds into the 3rd Period. Tyler Motte scored at the 8:49 mark into the 3rd Period to cut the Monsters’ lead to 3-2. Daniel Zaar joined the party, as he scored at the 10:42 mark of the 3rd Period. Alex Broadhurst was credited with an assist on the goal, as well as Jaime Sifers. Ryan Craig finished the job for the Monsters, scoring a goal at the 14:58 mark of the 3rd Period. Rockford scored one more goal, but it was too late. The Monsters had defeated the Rockford IceHogs 5-3, as they swept the IceHogs right out of Quicken Loans Arena. The team will wait to face the winner of the Grand Rapids and Milwaukee series.

After the game, Head Coach Jared Bednar spoke about the team’s performance.

Get ready for some fun times Cleveland, as the Monsters are joining in on the playoff excitement!