Monsters #LightTheLand And Win Game 1; 5-3 On The Road 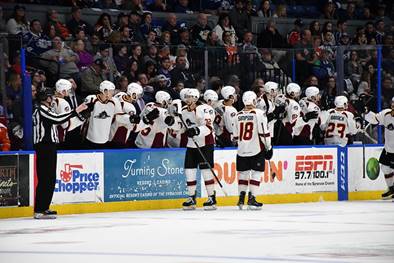 Courtesy of the Tony Brown

SYRACUSE, NY – The AHL’s Cleveland Monstersdefeated the Syracuse Crunch 5-3 on Friday at War Memorial Arena in Syracuse, NY in Game one of the two teams’ best-of-five game North Division Semi-Final series. With Cleveland leading the series one game to none, Game two looms Saturday in Syracuse at 7:00 pm

After a scoreless opening period, Cleveland grabbed a 1-0 lead at 10:15 of the second frame when Mark Letestu posted an even-strength marker on feeds from Sonny Milano and Dan DeSalvo before Monsters forward Ryan MacInnis made it 2-0 Cleveland with an unassisted even-strength tally at 12:26. The Crunch responded, however, with an Alexander Volkov power-play strike at 17:55 to draw within a goal heading into the final stanza.

In the third, Syracuse tied the game with a Cory Conacher power-play conversion at 10:49 before Cleveland’s Kevin Stenlund put the Monsters back in front 3-2 on feeds from Kole Sherwood and Garret Cockerill. Then, Zac Dalpe notched what proved to be the game-winning goal at 14:01 of the final frame, a five-on-five marker that made it 4-2 Cleveland at 14:01of the third. Syracuse’s Carter Verhaeghe drew the Crunch within one at 18:08, tallying with the extra attacker, but the Monsters secured a 5-3 game-one victory at 19:23 of the third by virtue of an unassisted empty-net score by Dillon Simpson.

Monsters goaltender Brad Thiessen stopped 16 pucks on Friday to improve to 1-0 in the postseason while Crunch backstop Eddie Pasquale fell to 0-1 in the playoffs following a 23-save performance.

Next up for the Monsters, it’s Game two of the team’s best-of-five game North Division Semi-Final series vs. the Crunch on Saturday with full coverage, live from War Memorial Arena, underway at 7:00 pm EST on Alt 99.1, AHLTV and the Monsters Hockey Network.