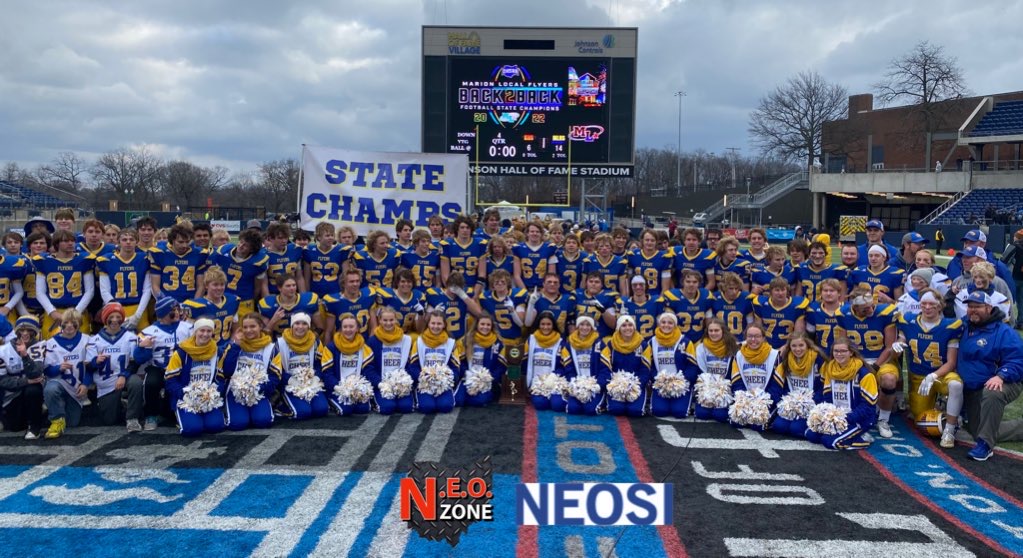 CANTON, Ohio — For the entirety of the 2022 playoffs, it appeared that Marion Local and Kirtland were on a collision course for Canton.

In every season since 2011, at least one of these two dominant programs has won a state title.

In their first head-to-head meeting since 2018, the Flyers earned a 14-6 win for their state record 13th in school history.

Marion Local came into Saturday in the midst of what could go down as the best defensive season in OHSAA history. Only giving up an average of 2.5 points per game, the Flyers posted a state record 11 shutouts during their run to the title game.

Kirtland’s defense was among the best in the state as well, holding their opponents to exactly five points per game.

These two dominant defenses were on full display early, as both sides fought to a scoreless tie through one.

This might be the hardest hit we’ve seen at the high school level!

Kirtland gets the goal line stand in a 0-0 game.#OHSAAChampionships 🏈 pic.twitter.com/PTshBIbDxc

After playing over 22 minutes of scoreless football, it was Marion Local who would strike first on a 2-yard touchdown run by Darren Meier.

There are very few 7-0 leads that could be described as “comfortable”. But with 11 shutouts under their belt, Marion Local was already in a great position.

One of Nathan Buschur’s two interceptions came on the final play of the half, when the sophomore linebacker jumped in front of freshman Jake LaVerde’s pass for the exclamation point on a dominant 24 minutes of football.

Marion Local seals a first half shutout on this interception by Nathan Buschur.

Rocco Alfieri was able to run for 56 yards on 12 carries, but the Hornets remain scoreless.#OHSAAChampionships 🏈 pic.twitter.com/mspO09gzR2

Flyers Begin To Take Off

Kirtland didn’t have much time to celebrate Gino Blasini’s third quarter interception before Marion Local came up with a pick of their own.

Once again, it was Buschur who came down with the errant pass, taking it 57 yards to the end zone to give the Flyers a 14-0 lead.

Nathan Buschur intercepts his second pass of the game, taking this one 57 yards to the house.#OHSAAChampionships 🏈 pic.twitter.com/X72SBYoh44

Before a critical fourth down, head coach Tiger LaVerde used one of his valuable timeouts to draw up a potential momentum shifting conversion.

Not only did Kirtland convert, they got into the end zone on a 10-yard touchdown pass from LaVerde to Will Sayle.

Kirtland is back in it! 🐝

On fourth down, Jake LaVerde finds a wide open Will Sayle for a 10-yard TD.#OHSAAChampionships 🏈 pic.twitter.com/hASvYiBAYe

LaVerde’s first career state championship touchdown pass snapped a stretch of shutout football for Marion Local’s defense that dated all the way back to September 23rd.

Despite a third quarter push, Marion Local was able to stay collected and hold Kirtland scoreless the rest of the way.

There were opportunities for Coach LaVerde’s squad, but the punishing front line of the Flyers was too much for the Hornets to handle.

Marion Local adds on to the state record, winning their 13th title in school history.#OHSAAChampionships 🏈 pic.twitter.com/GCrBFkKm3c

Adding To The Trophy Case

The 14-6 victory for Marion Local marked the 13th state title for the storied franchise out of rural west-central Ohio. They have now completed back-to-back 16-0 championship seasons in two different divisions.

With a talented group of underclassmen, it doesn’t look like Flyers will be slowing down anytime soon.

What’s Next For Kirtland?

Kirtland will graduate several high impact seniors, but the class of 2023 is relatively small compared to past seasons.

Alfieri, Blasini, and Jake LaVerde will all return next season, along with hard hitter Macguire Boyd and defensive anchor Will Sayle.

Not winning a title in back-to-back seasons will surely be disappointing for this dominant program, but opportunities should be plentiful going forward for this young team.

Top Performers of the Game