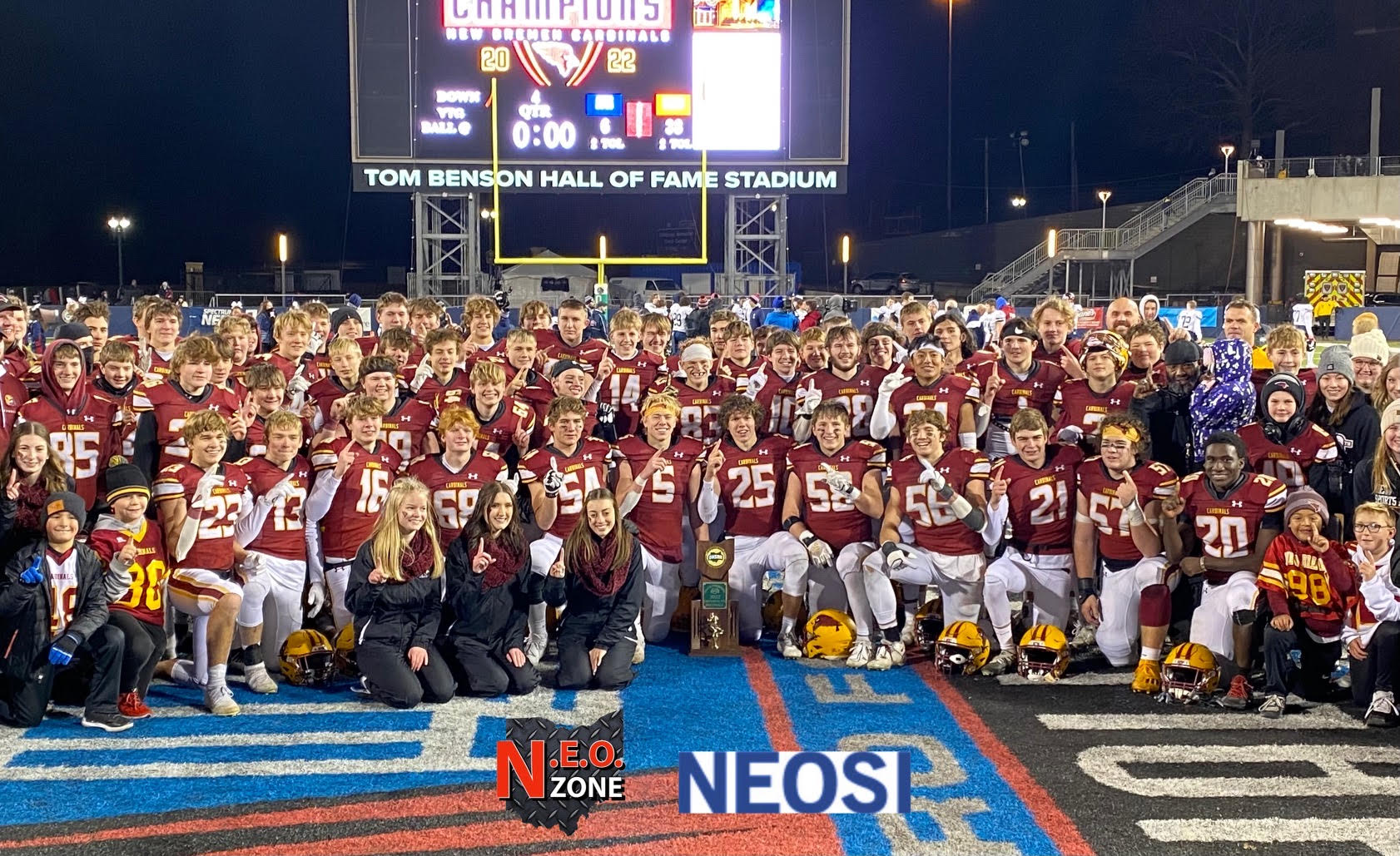 The Cardinals scored on their first drive and never looked back, cruising to a 38-6 win in the Division VII championship game over Warren JFK for the second title in school history, the other being a 31-0 win over the Eagles in 2020. Senior QB David Homan turned in a dominant performance with 234 yards rushing and four touchdowns. The defense came up with four turnovers and stifled the JFK offense all game long.

The Cardinals received the opening kickoff and wasted no time in making their presence felt. New Bremen put together a 13 play, 64-yard drive that was finished off with a 13-yard Hunter Schaefer touchdown, giving them an early 7-0 lead. JFK was able to pick up a first down on their opening drive but were forced to punt. As the Cardinals returner went to field the punt, it went through his hands and the Eagles found second life, setting them up first and ten on the New Bremen 22.

New Bremen gets on the board first with a 13-yard TD run by Hunter Schaffer.#OHSAAChampionships 🏈 pic.twitter.com/IKGI8uYNNn

Again, JFK was able to pick up a first down, but the Cardinals defense held strong, forcing a turnover on downs and giving the ball back to their offense on their own 13-yard line. Facing third and two on their own 33, QB David Homan called his own number and took it 67 yards to the house, putting New Bremen up 14-0.

The Eagles would get two big runs from Antonio Smith on their next possession and drove down to the New Bremen 36. On fourth and ten, QB Caleb Hadley scrambled around but was only able to pick up eight, giving the ball back to the Cardinals.

New Bremen would drive into JFK territory again but, for the first time, the Eagles would force a punt. It seemed like the JFK offense was finding it’s rhythm after Smith picked up 30 yards on their first three plays. The Eagles decided to try some trickery and it backfired as Evan Eyink picked off WR Aidan Rossi, giving the Cardinals the ball back in JFK territory.

Two plays later, Homan struck again as the QB took the 41 yards for the New Bremen touchdown, his second of the game and stretching the lead to 21-0. JFK would go three and out on their next drive, giving the Cardinals the ball on the Eagles 25 with just over two minutes in the half.

David Homan has taken over this game.

He has 161 rushing yards in the first half after this 41-yard TD.#OHSAAChampionships 🏈 pic.twitter.com/hSEhQ1DWIK

New Bremen would stay run heavy on the drive, despite the clock, and Hunter Schaefer knocked in a 35-yard field goal as time expired to give the Cardinals a 24-0 lead at the half. Homan and Schaefer combined for 217 yards rushing in the half while the defense allowed just 133 yards to the Eagles.

Hunter Schaffer walks off the first half with a 35-yard field goal.

Believe it or not, this was the first field goal attempt of the entire weekend!#OHSAAChampionships 🏈 pic.twitter.com/d9xzpStX37

JFK received the second half kickoff and put together an impressive 10-play, 65-yard drive that included a huge fourth down conversion where Caleb Hadley found Aidan Rossi. On second and nine, Hadley and Rossi hooked up again, this time for a 27-yard touchdown. A failed two-point conversion made it 24-6 New Bremen early in the third.

Aidan Rossi fires one in to Caleb Hadley for a 27-yard TD.

Just when it looked like the Eagles could make it close, the Cardinals responded. The Cardinals put together a 14-play drive that ate up nearly eight minutes of the clock. On first and goal, David Homan called his own number once again for a seven-yard touchdown, stretching the lead to 31-6.

Homan picks up another rushing TD for New Bremen, this one coming from 8 yards out.#OHSAAChampionships 🏈 pic.twitter.com/hE6LEcwA92

On the ensuing kickoff, JFK coughed up the ball and New Bremen took over on the Eagles 27. On the very next play, Homan kept it himself again for another Cardinals touchdown, his fourth of the contest.

New Bremen has put a running clock on the AP #1 team in D-7.

After this 27-yard run, David Homan increases his total to 310 total yards and four touchdowns.#OHSAAChampionships 🏈 pic.twitter.com/fq9jpUviXj

With the running clock in effect, JFK couldn’t get anything going offensively and New Bremen was content to sit on the ball and run the clock. When it finally struck zero, the Cardinals walked away with a 38-6 victory and their second title in school history.

David Homan turned in one of the most impressive performances of the weekend. A two-way player, the senior QB rushed for 234 yards and four touchdowns and flew around on defense. The offensive line won the battle up front and consistently opened wide lanes for the Cardinals to run for 287 yards and five scores.

JFK has been a run heavy team all year long and the Cardinals made them further one dimensional by putting pressure on the QB all night long. When New Bremen got out to a big 24-0 lead, it made it nearly impossible for JFK to make a comeback, especially with the way the Cardinals were able to run the ball.

After almost shutting down their football program a decade ago, New Bremen has won its second state title in just the last three seasons.

The MAC picks up their second state championship of the day, as New Bremen wins their second title in three years.#OHSAAChampionships 🏈 pic.twitter.com/f5umhNfyMm