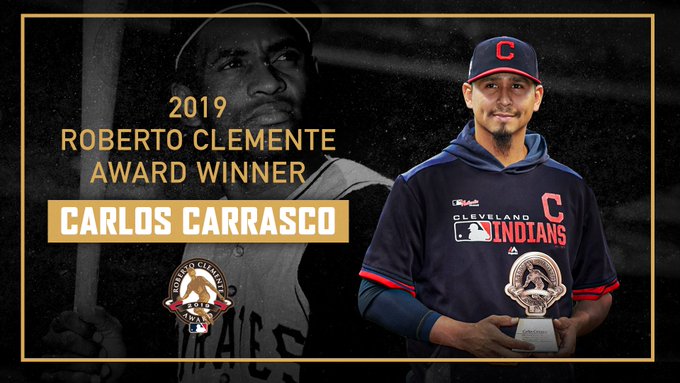 It was an emotional year for Indians pitcher Carlos Carrsco, as the popular Indian took on a battle with leukemia which forced him to miss a good portion of the season.

Through it all, Carrasco always continued to give back via acts of charity, and today it was announced that he has been named recipient of the 2019 Roberto Clemente Award.

Carrasco becomes the first Indians player to win the Roberto Clemente Award since Hall of Famer Jim Thome received the honor in 2002.

Overall three Indians have won the award, including Carrasco, Thome and Andre Thornton, who won the award in 1979.

“We are proud to welcome Carlos Carrasco to the prestigious fraternity of Roberto Clemente Award winners,” MLB commissioner Rob Manfred said in a statement. “The Roberto Clemente Award is the most important individual player award due to the genuine impact that Major League Players have on those who are most in need.

“Carlos, through his global philanthropic efforts, is an excellent example of someone who selflessly acts on behalf of the less fortunate and embodies the spirit of our game’s most celebrated humanitarian.”

The award named after the Pittsburgh Pirates legend honors a major league player who “best exemplifies the game of baseball, sportsmanship, community involvement and the individual’s contribution to his team.”

Carrasco’s charity acts includes work that he’s done in Venezuela, Colombia and Africa as well as his home in Tampa.

“Winning the Roberto Clemente Award is one of the most prestigious honors,” Carrasco said in a statement.

“This is something that I have dreamed of, and I am very excited to share this honor with the Cleveland Indians and my home country of Venezuela. I hope to continue giving back to others and inspire more players to help in the community.”

Words can’t describe what @Cookie_Carrasco means to our community and organization.

THANK YOU for making such a big impact on and off the field. Congratulations! pic.twitter.com/R9Vr0KhHFJ

The Indians Have to Be Careful Even Toying with the Idea of Trading Francisco Lindor
Podcast: CLE Sports Talk with Casey Drottar – 10.28.19