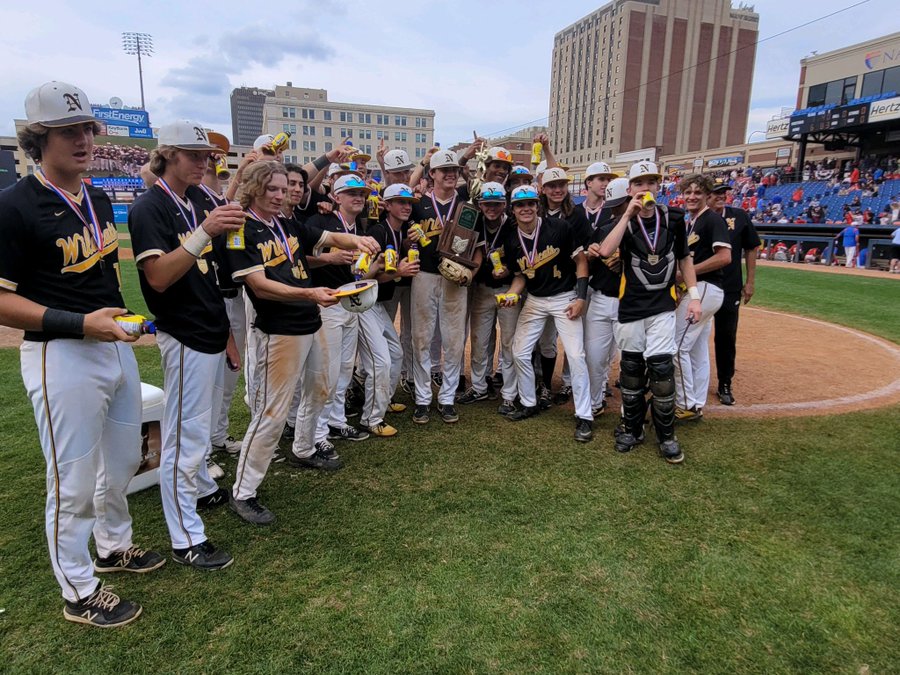 The Northview Wildcats (21-8) fell behind early but jumped all over the Grove City Greyhounds (26-8) to win 6-1 and bring home the first State Championship in school history Saturday afternoon at Canal Park. Wildcats’ starter Blake Bradford put forth a dominant performance going seven innings, giving up no earned runs on four hits and a walk to go along with six strikeouts.

The Greyhounds got things going early when, in the top of the first, senior Jackson Ware hit a one-out triple to right-center and Dennis Ritlinger-Nirider walked to give Grove City two on with one out. Ritlinger-Nirider attempted to steal second and catcher Garrett Draper’s throw was off the mark, allowing the run to come across and the Greyhounds to take a 1-0 lead. Braxton Bryant would single, but Bradford was able to get out of the inning with just the one run scored.

Grove City went to the bullpen in the third, bringing in Jackson Ware after starter Zak Sigman walked two batters to start the inning. Following a strikeout, Brody Acres hit a double down the right field line, scoring two, and putting the Wildcats up 2-1. Northview would strike again in the fourth after Alex Prymas hit a lead-off triple that was followed up with a Draper single to make it 3-1 after four.

With the bases loaded, Pyrmas attempted a suicide squeeze play and missed for strike three, but the catcher dropped the ball and Alex Dupree came flying down the line to score. Draper came through again for the Wildcats when the senior hit a sacrifice fly to center that scored Alex Dupree and stretched the lead out to 5-1 heading into the sixth.

Northview would strike yet again, this time courtesy of a Dupree single that plated Benny Seals, making it a 6-1 game head into the Greyhounds final at bat. Grove City would get a baserunner with two outs when Spencer Stoll reached on an error, but two pitches later, Trent Ruffing hit a liner right back up the middle at Bradford. The senior snagged it, looked into his glove, and the mob commenced on the mound.

Jackson Ware and Ty Clifton led the way offensively for Grove City, Ware going 1-3 with a triple and Clifton 1-3 with a double. Picking up the loss was Zak Sigman, who went two innings with two earned runs on four walks to go with two strikeouts. The loss marks the Greyhounds’ first appearance in the State Championship game and their first Final Four appearance since 2012.

Blake Bradford was dominant on the mound for Northview, allowing only one hit in the final four innings and keeping Grove City off balance all game long. Brody Acres was the leader offensively for the Wildcats going 2-4 with a double and two RBI. Garrett Draper chipped in a 2-4 effort with a double and two RBI. The win gives Northview their first State Championship in their first appearance in the Final Four.