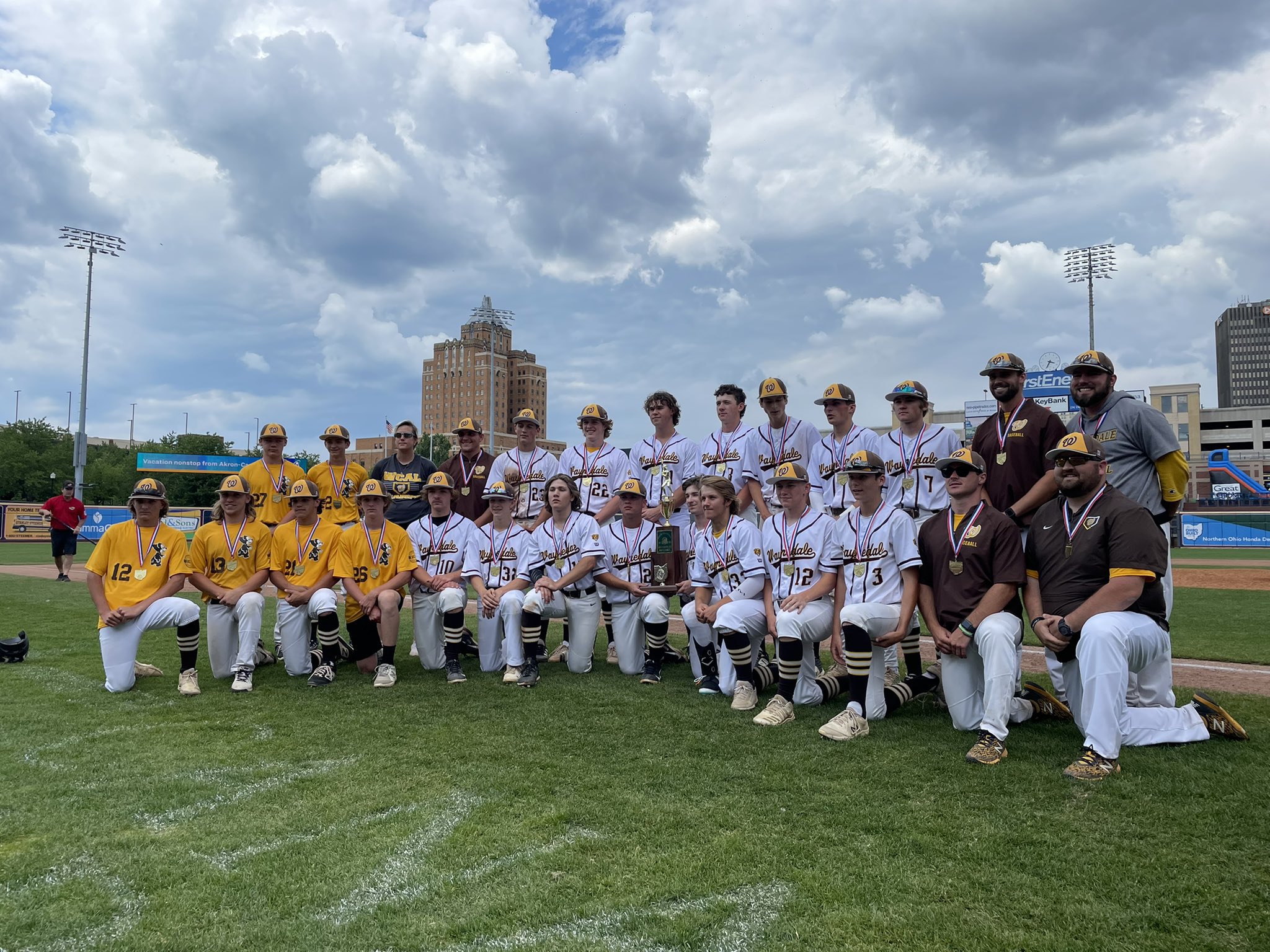 It took an extra inning, but the Waynedale Golden Bears (30-4) got a walk-off, bases-loaded single from junior Connor Gatti to win the first state championship in school history, taking down the Edison Chargers (24-9) 2-1 Saturday afternoon at Canal Park. Otto Solorzano pitched a gem for the Bears, going eight innings giving up one earned run on nine hits and striking out seven.

The Bears would strike first in the home half of the first inning when Josiah Raber, who reached base on a fielder’s choice, scored on an error when Edison attempted to turn a double play, making it 1-0 Bears after one. Solorzano cruised through the next three innings allowing two singles and striking out four while keeping the Chargers off the board. Edison starter Ben Bates settled in himself, getting better as the game progressed and keeping the Bears offense from mounting any kind of threat.

In the top of the fifth, Bryce Michaelis singled through the left side of the infield and immediately stole second base, giving the Chargers a runner in scoring position with only one out. After Solorzano got Xander Danner to foul out to the catcher, Thomas Simon singled and brought home Michaelis, tying the game up 1-1.

Dominic Dymond singled to lead off the sixth for Edison and that brought Hayden Fry to the plate for what might have been the play of the game. Dymond popped up to catcher Josiah Raber, and, when he went to throw down to get the runner at first, the ball sailed into right field, and Fry darted to second. As Jay Mast threw the ball back into second baseman Dylan Raber, Josiah started pointing at first base and ran to the bag. Noticing Fry had not tagged up, Dylan fired the ball to Josiah for the double play to end the Charger threat.

Well, this is not your normal double play.

On a bunt attempt, @Jo_Raber30 hops right up and makes a spectacular catch, the throw gets away on the double play attempt, but the runner never returned to 1st. On the appeal, the runner is doubled up!

To the 7th, tied at 1. pic.twitter.com/Dqv2CRGHXq

Blake Simon got a one-out single in the top of the seventh but was out at second on a fielder’s choice that allowed Michaelis to reach first. Having already scored the lone Edison run, Michaelis took off towards second on a steal attempt but over slid the bag and was tagged out by a diving Ean Miller to end the inning. After settling into his groove in the fourth inning, Bates continued his dominance over the Bears lineup sending the game to extra innings tied 1-1.

The Chargers got one out singles from Thomas Simon and Clint Finnen, but Solorzano was able to get out of the inning with a strikeout and a good play from shortstop Ean Miller venturing into left field to field a Fry popup and end the inning. That brought the Bears to the plate with a chance to win it all.

Senior Braden Hershberger led off the home half of the eighth by beating out an infield single and Dylan Raber followed that up with a sacrifice bunt to move Hershberger into scoring position. Josiah Raber was walked, Mast grounded into a fielder’s choice, and junior Timmy Short was intentionally walked to load the bases for Connor Gatti with two outs. Gatti, down to his last strike, lined a single to right-center, Josiah Raber scored, and the celebration was on, as the Golden Bears claimed their first ever State Championship 2-1 over the Edison Chargers.

Edison got a fantastic performance from their starter Ben Bates; the senior went 7.2 innings, giving up one earned run on six hits and three walks to go along with nine strikeouts. Thomas Simon came through offensively for the Chargers going 2-4 on driving in the lone run. The loss ends the best season in school history and the first appearance in a State Championship game for Edison.

As has come to be the norm this postseason, Waynedale got great starting pitching, this time from Solorzano, and their offense did just enough to come out with the win. Dylan Raber led the way at the top of the order going 2-3, and Timmy Short came through yet again, this time with a walk-off RBI single. The Golden Bears will lose some key pieces from this, the best team in school history. The good news is they will return both starting pitchers in Trey Barkman and Solorzano, making the Bears one of the favorites to return to Canal Park again next season.