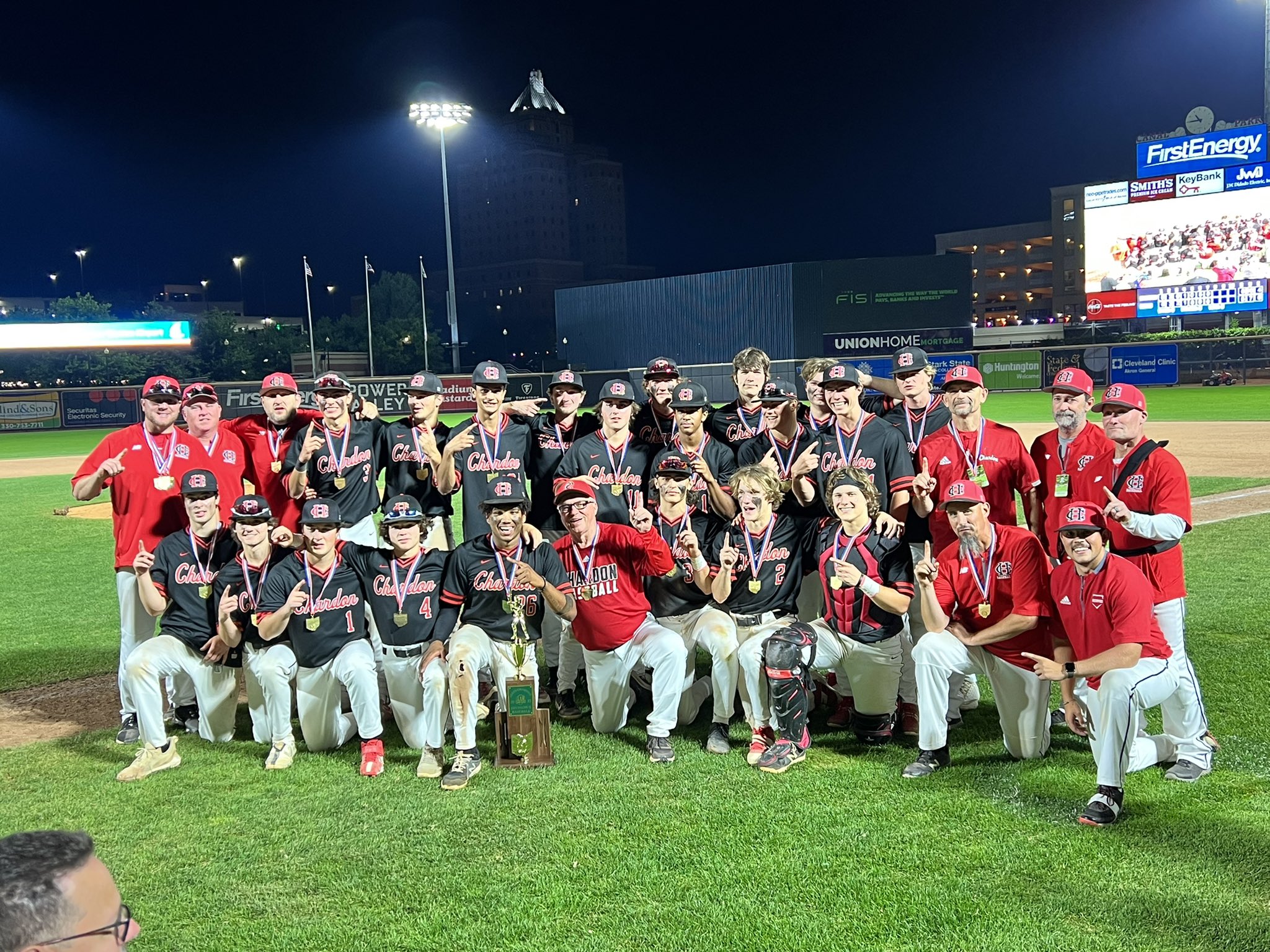 The Chardon Hilltoppers (24-9) exploded for five runs in the sixth inning to take down the defending State Champion Archbishop Hoban Knights (23-10) 8-5 in the nightcap of championship Saturday at Canal Park. Canal Park is only three miles from Canal Park and the Knights were the defending champs, but the Hilltoppers were able to pull off the upset and claim their first State Championship.

Both teams left runners stranded in the first, but, in the top of the second, Chardon got a leadoff double from right fielder Stone Fawcett, who would later score on a Kyle Maronde groundout to give the Hilltoppers a 1-0 lead. Ethan Faber drew a four-pitch walk and was driven in on a Will Francis double to stretch the lead to two.

The Knights would strike right back in the bottom half of the inning with Shawn Parnell leading things off with a single and then stole second base. With two outs, freshman Jordan Kievman drove a triple out toward the wall in right, scoring Parnell. Hoban wasn’t done yet, though, as senior Matthew Terzola hit a bloop single to center to make it 2-2 after two.

Jake Barker was able to get a one-out single in the top of the third, but Hoban starter Landon Ladany was able to get out of the inning without any damage. In the home half of the third, Zack Zimmerman hit a one-out single to left-center and, after walks to Parnell and Nathan Shimmel, center fielder Parker Falkenstein came to the plate with the bases loaded. The sophomore drove a 1-2 pitch to left, scoring two and putting the Knights up 4-2.

Both teams would get runs in the fourth, when Maronde drove a triple to right field and Faber followed that up with a single to close the gap to one. Hoban would get some action going in the bottom of the inning when Michael Ciavolella and Nolan Holmgren drew one-out walks. Zimmerman grounded into a fielder’s choice, giving the Knights runners at the corners with two outs. Zimmerman took off towards second on a steal attempt and the throw got away from the second baseman, allowing Ciavolella to score and extending the Hoban lead to 5-3 after five innings.

Both teams went scoreless in the fifth, but the Hilltoppers offense exploded in the top half of the sixth inning. Leo Colombi got things going with a single up the middle, and, after a strikeout, both Faber and Will Francis were hit by pitches to load the bases. Up came Christian Hall, who singled to center, moving everybody up a base and narrowing the lead to one. Nolan Kirsch became the third batter to be hit by a pitch in the inning and Faber came home to score, tying the game at five. Heath Fetchik struck out swinging, but a wild pitch brought home Francis and gave Chardon its first lead since the second inning. Barker kept the inning going with his second single of the game, this time driving in two runs and giving the Hilltoppers an 8-5 lead heading into the final frame.

🏆⚾️ #OHSAA DIVISION II BASEBALL CHAMPIONSHIP: Chardon scores five in the top of the sixth to take the lead over Akron Archbishop Hoban 8-5.

In the top of the seventh, Chardon was able to load the bases but couldn’t push a run across, leaving a three-run deficit facing the Knights in their final at-bat. Parnell was able to get a one-out single to keep things alive, but Shimmel lined to third and the Hilltoppers turned a double play, clinching their first title in school history.

Parnell led the way offensively for the Knights, going 2-3 on the evening, and the team got two RBI from Falkenstein. Landon Ladany picked up the loss, going 3.1 innings giving up three earned runs on five hits and two walks to go along with three strikeouts.

Senior Christian Hall picked up the win for Chardon, going 4.1 innings and giving up four earned runs on seven hits and a walk with one strikeout. Jake Barker went 2-4 with two RBI and Kyle Maronde went 2-4 with an RBI to lead the way offensively. Not only did the Hilltoppers capture their first State Championship, this season also marked the school’s first appearance in the Final Four since 1950.