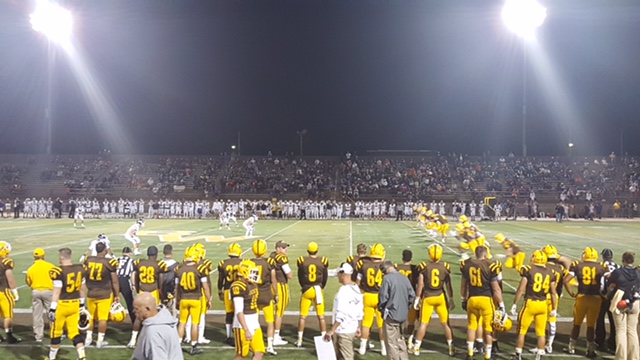 Senior quarter back Robbie Plagens looked sharp early, leading the Baldwin Wallace Yellow Jackets to a touchdown on just the second drive of the game. Plagens connected with wide receiver Bryon Cook on a 40 yard post route to put BW up 7-0.

That was the last time the yellow jackets would have a lead, as the University of Mount Union Purple Raiders scored 49 straight points to secure their third win of the year.

Mount Union entered the game as the #1 ranked Division III football team and is expected to keep that spot after a blowout win.
BW racked up a large majority of their yards through the air, and elected to abandon the run game very early. The Yellow Jackets put up 198 total passing yards. Plagens completed 9-14 passes for 121 yards and the previously mentioned touchdown to Cook.

In an attempt to spark the offense,  Plagens was replaced in the second half by Sophomore Jake Hudson, who completed 6 passes on 12 attempts for 77 yards.

Each QB also threw up an interception. Byron Cook had perhaps the best day offensively, catching four passes for 60 yards and touchdown.

BW Head Codch John Snell stated after the game that the offense was centered around the pass in an effort to better compete against the #1 ranked Purple Raiders.

However, Smith did punt the ball for BW 8 times, averaging 36 yards per punt and pinning Union inside their own 20 twice.

Mitchell ran the ball 32 times for 259 yards, the most in his collegiate career. He also accounted for two of the purple raiders seven touch downs.

Mount Union used a pair of quarterbacks in Freshmen Luke Poorman and D’Angelo Ford to put up 131 passing yards and two touchdowns.

Baldwin Wallace has now played it’s two toughest games of the year, losing to both John Carrol and Mount Union.

Now sitting at 1-2, BW will need to run the table to garner any national playoff consideration. The Yellow Jackets travel to Marietta next Saturday, Oct. 10 for the third OAC game of the season. Kickoff is set for 1:30 pm.