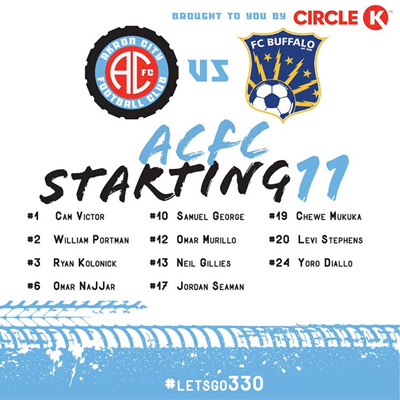 ACFC hosted FC Buffalo in a Rust Belt Conference battle Sunday afternoon. FC Buffalo won, 1-0, in a tight game decided by a goal in the 73rd minute by FCB substitute Ander Castillo. With seven games played, Buffalo sits alone in 3rd place with 10 points, while Akron sits just below them with four points. Akron’s next game is at Mercyhurst University against the Erie Commodores on Saturday, June 18th at 7 pm. 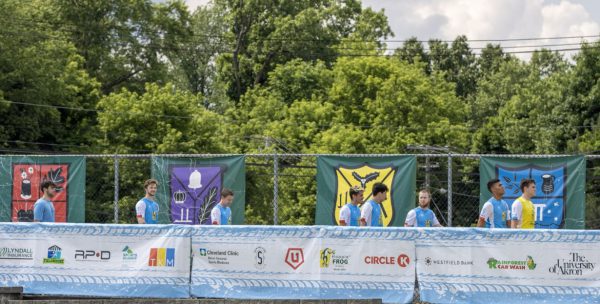 The first 20 minutes were some of the most physical soccer these two teams have played. Maybe it’s because this was their third and final meeting of the year. Each team had players go down on extremely hard tackles and shoves, but the ref let play go on for most of these confrontations. One of the best chances for Akron came in the 35th minute. With some nice passing in the midfield a well weighted through ball found Sam George at the left corner of the Buffalo box. His quick kick forced FCB goalie Bryce Tramuta to jump but the ball went just above his outstretched hand and landed over the top crossbar. 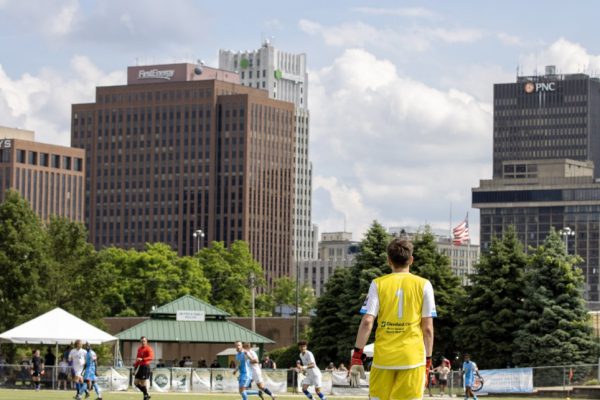 (Great shot of Cam Victor and the Akron skyline by @CharlesMurray15)

Both teams exchanged yellow cautions in the next six minutes, but both were for naught, though the visitors from New York saw their free kick slide untouched through the ACFC box where no one got onto the ball as it slid harmlessly away.

Akron’s next chance came around the 44th minute. After 22 straight passes Neil Gillies finds Parker Boyce, who was brought on midway through the first half for the injured El Hadji Diallo, on the left wing. His cross into the box seems to carom off an FCB defender and Chewe Mukuka couldn’t get a foot on the loose attempt. Then, a minute later, Chewe is taken down from behind near the top of the Buffalo box. Chewe’s free kick forces Tramuta to make a tough save going to his right.

The half ends in a 0-0 tie, but not before a kick from FCB forces Cam Victor into a great save to keep it scoreless.

The second half is more of the same physical play from the kickoff. Both sides fighting for 50-50 balls. In the 53rd minute, Boyce sent a pass to Levi Stephens, which was cleared for a corner for the men from Summit County. The left-footed in swinging corner by ACFC’s Ryan Kolonick is cleared by FCB.

Buffalo has a pair of corners a few minutes later but Gillies and Victor make sure the score is 0-0 still. 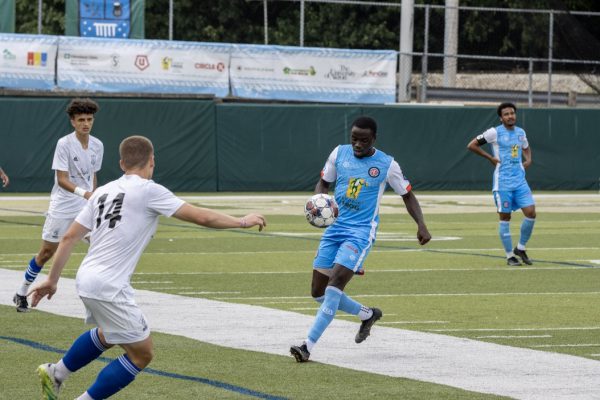 Things started to heat up for Buffalo. In the 67th minute they had a corner and a near goal. But by the 72nd minute, the game is no longer tied. A long ball from the New York defending third finds open space into Akron’s defense. Ander Castillo from Buffalo outruns the defense and as Victor tries to challenge the kick and close space, Castillo pushes it past the goalie, finding the back of the net.

After two late fouls by Buffalo, Akron has two corners that are quickly cleared from harm. And those were the last two attempts for the draw.

Another close loss, the 3rd by 1 goal. The squad is back to practice tonight as we look to right the ship for the last 6 games.

While the results on the field are not where we want, we are grateful for the continued support of the Akron community.

ACFC’s next game is up in Erie, and it is hopeful that Akron City will get defender Dan O’Callaghan back from injury. And it is possible Akron’s Renato Kauzlaric will see his first action for the team. You can catch all the action live at elevensports.com. Or drive up if you want to!