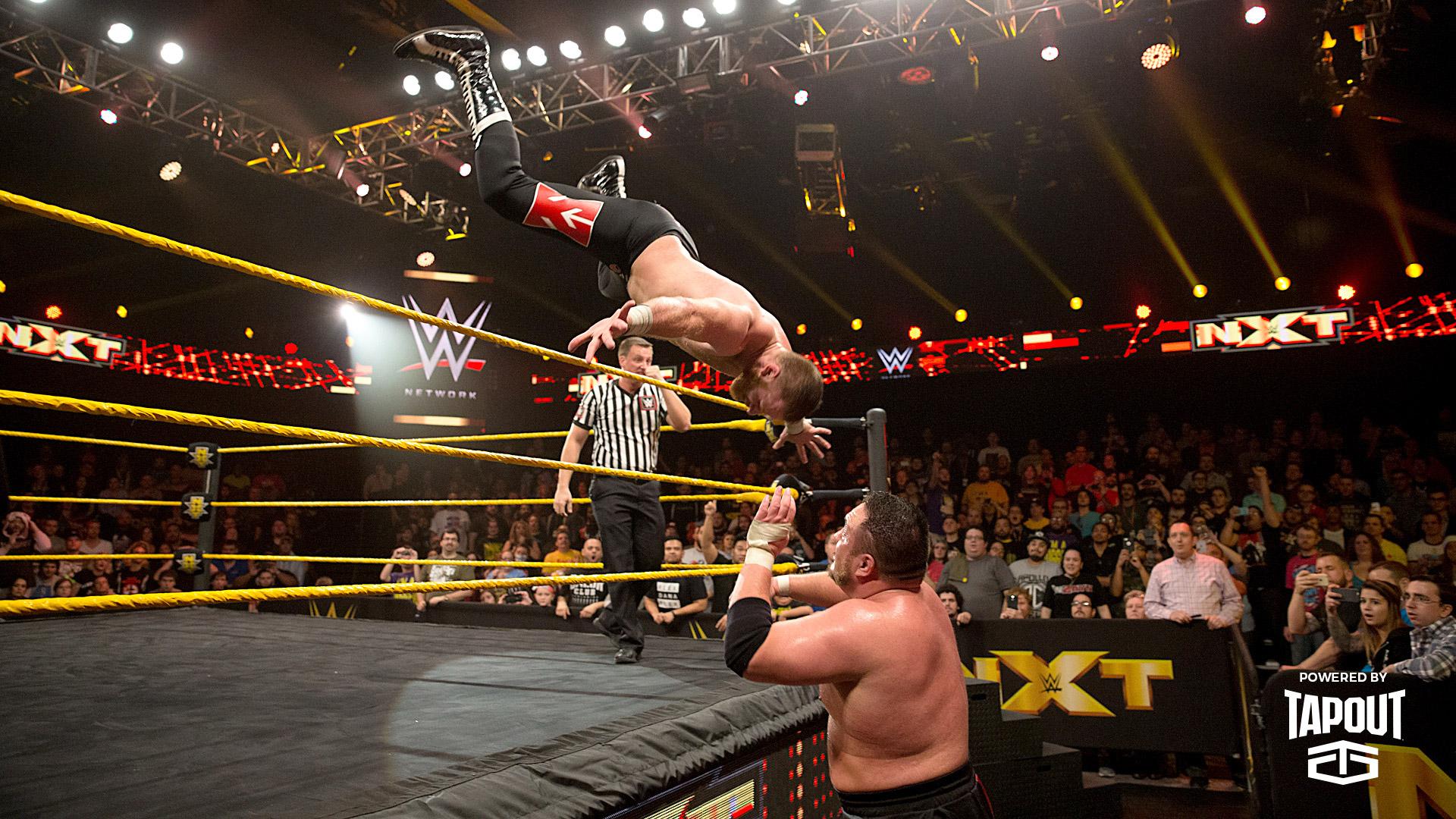 Regal announces that he will not suspend Baron Corbin for attacking Austin Aries because Aries asked him not to. Instead, Corbin will face Aries at NXT Takeover: Dallas. Regal also inform the crowd that the 2-Out-Of-3-Falls #1 Contender’s Match between Samoa Joe and Sami Zayn will take place that evening. As soon as Regal leaves the ring, Samoa Joe’s music hits.

The two competitors try to get a feel for their opponent’s offense. Joe misses a kick that was close to laying out Sami Zayn. Both wrestlers get some offense going, but neither one gets the upper edge. Joe starts to slow down Zayn, but Sami fights right back with a cradle pin that Joe kicks out of. Joe starts to fight back, hitting Sami with two thunderous chops. Before Joe can take advantage, Sami executes a springboard arm drag. NXT takes a commercial break.

After the commercial break, Joe is in control. He hits an elbow drop and gets Zayn into a submission hold. Zayn gets out but is knocked right back down. Joe takes Zayn into the corner and starts to pummel him. He hits a running knee on a sitting Sami Zayn that leaves Zayn in a lot of pain. Joe is being relentless at this point, stopping any chance of offense for Sami Zayn. Joe hits a belly-to-belly suplex that puts Zayn in even more pain. Joe continues to push the tempo until Zayn hits a few clotheslines. Joe is cornered by Zayn but reverses a Zayn attack into a Musclebuster, but Zayn reverses that.

Joe dodges the Helluva Kick and nails an Enzuiguiri. Joe starts to get in an offensive groove once again and starts picking Zayn apart. Joe hits a running senton and continues to punish Zayn. Joe starts to land strikes and goes for a chop, which is Zayn reverses and turns into the Koji Clutch. Joe fights out and hits a powerslam on Zayn. The cover is made by Joe but Zayn kicks out. NXT takes a commercial break. After the commercial break, Joe is back in control, landing numerous chops on Sami. The two start to exchange blows until Joe takes out Zayn’s legs. Joe goes off the ropes but has his momentum used against him as Sami sends him over the top rope and then executes a springboard moonsault outside of the ring. Zayn throws Joe back in the ring and then goes to the top rope. Sami hits a crossbody on Joe and goes for a cover, but Joe kicks out. Zayn goes for a Blue Thunder Bomb, but Joe reverses it and lands on Zayn, who kicks out of the pin attempt. They both get to their feet and Joe hits a clothesline that turns Zayn inside out.

The scramble for offensive momentum is ended by a STO from Joe, who then hits the Musclebuster for the pinfall.NXT takes a commercial break. (Samoa Joe 1 Fall, Sami Zayn 0 Falls) After the commercial break, the bell rings and Joe goes back on the attack. Joe puts Sami in the corner, but Zayn stops him in his tracks and hits a dropkick from the top rope. Zayn goes to follow up, but the referee stop him so he can check on Joe. As soon as Sami goes to take advantage, Joe is right back in his offensive groove. landing strikes left and right. Besides a quick roll-up pin attempt, Joe is manhandling Sami. Joe throws Sami outside of the ring and Zayn just gets back into the ring before the 10-count. Joe takes him back outside of the ring and throws him into the stairs.

Zayn just makes it back in again, but Joe takes him back outside of the ring and hits an STO. Sami makes it back in at the count of 9, which infuriates Joe. Sami starts unleashing on Joe, hitting a suplex on Joe. Joe rolls out of the ring but Zayn goes over the top rope and lands on Joe. Sami throws Joe back in the ring and dives off the top rope. Joe dodges but Zayn catches him in the Koji Clutch, forcing Joe to submit. NXT takes a commercial break. (Samoa Joe 1 Fall, Sami Zayn 1 Fall) After the commercial break, the bell rings and both men come out groggy, throwing ineffective strikes. Zayn finds the strength to hit the Blue Thunder Bomb, but Joe kicks out. Zayn goes to jump on Joe outside of the ring but Joe gets back in the ring quickly to try and take advantage.

Zayn fights off Joe and hits a Sunset Flip from the top rope, but Joe kicks out. Joe rolls out of the ring, but Sami flies through the ropes and turnbuckle to DDT Joe onto the floor. Zayn throws Joe back into the ring and covers him, but Joe kicks out. Sami goes for the Helluva Kick but Joe reverses and hits Sami with Powerbomb. Sami kicks out, but Joe turns it into a Boston Crab and then to a Crossface. Zayn reaches the bottom rope with his foot.

The chant of “Ole!” brings Sami to his feet, just for Joe to knock him back down with a kick. Sami gets back up and Joe knocks him down again with an Enzuiguiri. Sami gets up at the count of 9, but Joe knocks Sami down again with a ruthless kick to the face. Sami gets up again and reverses Joe’s attempt at the Coquina Clutch with his own version of the submission hold. Joe reaches the bottom rope with his foot and then both men get up and exchange strikes until Zayn hits the Exploder Suplex on Joe and gets in position for the Helluva Kick. Joe dodges and locks in the Coquina Clutch, forcing Sami to pass out.

Samoa Joe is the new #1 Contender for the NXT Title. This was the only match of the night, as it went the whole show. The match was outstanding, with no shortage of action at any point in the match. This may have been Sami Zayn’s last match in NXT and he surely left everything he had in that ring.