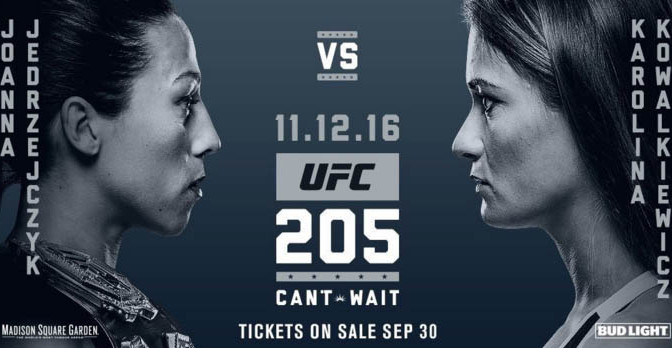 Joanna Champion is in the spotlight, just like she wanted.

When Joanna defeated Claudia Gadelha in her last title defense, she asked for a spot on the NYC card. When you’re as great as she is, you get what you want. Jedrzejczyk is intimidatingly fast and equally as powerful, as she is one of the most exciting stand-up fighters in all of MMA. Her fights never bode well for someone looking to exchange.

But don’t tell Karolina Kowalkiewicz that. She loves to trade punches as well, so if anybody can exchange with Joanna it’s her. Kowalkiewicz has fought hard to get to this opportunity and now she is only one win away from being the new UFC Women’s Strawweight Champion. And make no mistake, this will be a stand-up fight. Both women have had incredible fights against the top women in the division and this will be no different. It will be a war for the title, as both women want this win.

In the end, I think that Joanna Jedrzejczyk will win by unanimous decision over Karolina Kowalkiewicz to successfully defend her title.