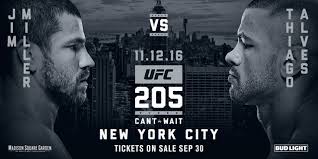 Here’s an intriguing match-up. Thiago Alves has not fought since early 2015. Jim Miller has been on a winning streak that has revitalized his career. These two are both veterans of the UFC, so how fitting that the UFC puts both of their longer-tenured roster members in the first NYC card.

Thiago Alves, who at one point in his career had an eight-fight winning streak, has not fought in a good amount of time. That could be worrisome for Alves, as he is looking to face a very tough Jim Miller. Alves is a super impressive knockout artist, as he can throw down with the best of them. When fighting a guy like Miller, that power can come in handy. Miller has only been knocked out once in his career, so getting him to the ground and keeping him there is very uncommon. Even if you get him there, he will fight his behind off to pop right back up or weather the storm. So for Alves, he should look to finish Miller early due to the fact that he gets better as the fight goes on.

Miller is on a two-fight winning streak, as he has made a very impressive turnaround after what looked like a retirement. Miller defeated Takanori Gomi and redeemed himself in a rematch with Joe Lauzon. Miller is on a roll and it doesn’t look like he’s going to slow down.

Jim Miller will win this fight over Thiago Alves by second-round submission.