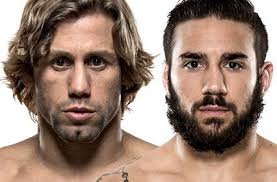 If I were to tell you that Urijah Faber was going to fight second on a pay-per-view card, you probably wouldn’t believe me.

That is the case on Saturday, when Faber squares off with Jimmie Rivera, a man on a absolute tear. Rivera has lost one fight in his MMA career, and has won his last eighteen fights in the octagon with a few different promotions. Rivera is a fighter who fights hard for the entirety of his fights, as he has thirteen of his eighteen wins by decision.

Now, we focus on the man known as “The California Kid”. A guy who has been one of the staples of the Bantamweight division and is a very talented submission artist. Faber has been on the the top of the card for a long time now, so a change to the middle of the card is very rare to see. We last saw Urijah fall to Dominick Cruz in a tremendous battle for the UFC Bantamweight Title at UFC 199. We look to see how Urijah Faber rebounds, as Faber is being called the underdog in this fight.

Faber has said earlier this week that a lot of guys are wusses, as they avoid Jimmie Rivera. He said Rivera has earned a whupping from him, so it shall be interesting to see how this one goes.

My prediction for this fight is Jimmie Rivera winning by Unanimous Decision, as he keeps on marching up the weight class ranks.