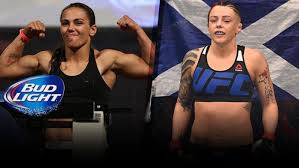 This fight starts off the main card and it is definitely an exciting one. Joanne Calderwood and Jessica Andrade are both looking to make their marks in the Strawweight division, a division where Joanna Jedrzejczyk is the champion and grows increasingly stronger as her reign continues.

Here’s how this fight breaks down. Calderwood is 11-1 and boasts a very strong knockout game, where Andrade has shown she can finish a fight from a knockout or submission standpoint. Calderwood has recently defeated Valerie Letourneau, a very tough fighter in the division who received a title shot late last year. The only worrisome thing for Calderwood is how she defends the submission attempts from Andrade. Calderwood’s only loss comes from Maryna Moroz, who caught Calderwood in an armbar in first round.

For Andrade, she is trying to find consistency, as she has went 2-2 in her last four fights. If she can protect herself from the heavy shots of Calderwood, this fight is hers to lose. She has been submitted before, so she must avoid being overaggressive or it could cost her.

In this fight, I think Joanne Calderwood continues her winning streak and extends it to three in a row, defeating Jessica Andrade by second-round TKO.