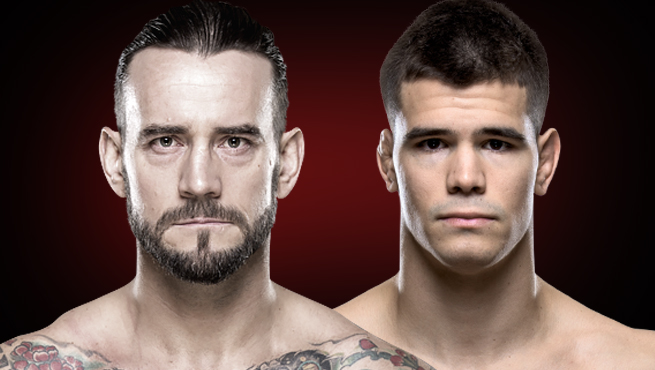 Well, well. It’s that time. The moment everyone has been waiting for….CM Punk.

Punk and Mickey Gall are third on the main card, but definitely considered the main attraction to a lot of fans around the world, as Punk looks to be the second successful professional wrestler to make the transition to the world of mixed martial arts. In his way is a young and talented Mickey Gall, who is looking to make a name ff of his fight with Punk, a fight in which Gall has called for specifically after he was found on the show “Dana White: Looking For A Fight”. What is super impressive in the two fights Gall has had is the extreme tenacity and easy-going nature of his fighting style, which both have been finished by submission very quickly.

Punk has been training with Roufusports, with legend Duke Roufus. With many setbacks in his training due to injuries, Punk has persevered and is ready for a fight with Gall. Along the way, Punk had help from Anthony Pettis and the UFC Welterweight Champion Tyron Woodley. The advice may come in to play, but ultimately, it is Punk who has to execute the gameplan.

With that being said, Mickey Gall will win this fight by first-round submission. I commend CM Punk for making a great transition and just getting in the octagon alone silences the critics. On this night however, I believe Mickey Gall will win and start to move towards the top of division.