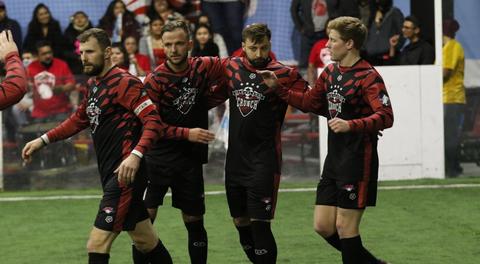 The Cleveland Crunch continued their winning ways after defeating the Chicago Mustangs in back-to-back games this past weekend at Grand Sports Arena in Hoffman Estates, Illinois. The Crunch outscored the Mustangs 20-12 winning by a score of 10-6 in both games. Cleveland remains unbeaten this season and is in the driver’s seat to capture first place in the Great Lakes Division of the Major Arena Soccer League 2.

Leading the way for the high-powered Cleveland Crunch offense was midfielder, Admir Suljevic, and forward, Mikey Derezic, who combined for a total of 15 goals over the course of both games. In Game 1 of the double-header, the Crunch got off to a slow start as the Mustangs took a 2-0  lead with 4 minutes left in the first quarter. However, it wasn’t long until Derezic found the back of the net to make it 2-1 Mustangs. Just 3 minutes later, Derezic scored another off of an assist from his partner in crime, Suljevic, to make it 2-2. The second quarter saw a hat-trick from Suljevic as the Crunch led the Mustangs 5-4 at the half. Early into the 3rd quarter, Derezic completed his hat-trick, while Suljevic added his 4th goal of the night. The pair finished with 5 goals and 1 assist each earning the MetroHealth ‘Men of the Match’honor in the 10-6 win.

In Game 2 of the double-header, the Crunch saw goals from 6 different players in another 10-6 win. Mikey Derezic took care of business as usual with a hat-trick, Flyin Ryan Minick and Admir Suljevic had 2 goals each and Kurt Raney, Ben Hryzko, and Kevin Blackwood each had 1 goal. Kurt Raney earned the MetroHealth ‘Man of the Match’ honor for his performance in game 2. Goalkeeper, Marijo Musa, totaled 13 saves in both games.

The Crunch improves to 9-0 and will travel to Muskegon on March 5 to take on the Risers at Mercy Health Arena. Kickoff is scheduled for 7:00 pm EST. For questions or additional information, contact us at info@theclevelandcrunch.com.