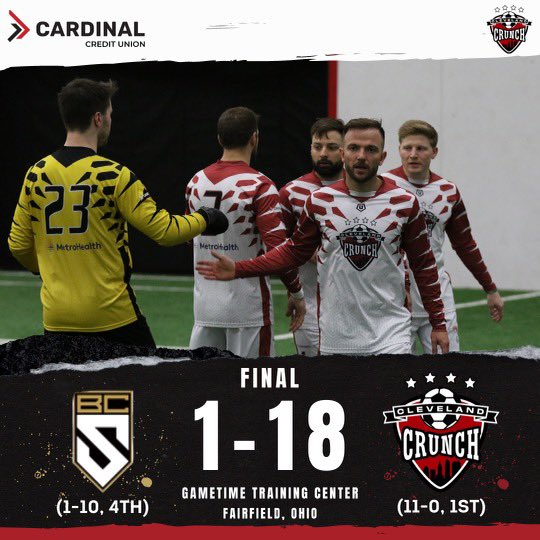 March 13, 2022 – The Cleveland Crunch hit a season high Sunday afternoon, putting 18 in the net against the Cincinnati Swerve. The final score of the match was 18-1 and the Crunch remains undefeated, advancing its record to 11-0.

The Crunch came out hot in the 1st quarter with Mikey Derezic opening up scoring for the Crunch at the 3 minute mark, shortly followed by a goal from Rylan Wikle. At the 11 minute mark, Chris Cvecko scored his first of the night, putting the score at 3-0. With two minutes left in the first, Wikle scored his second and Derezic slotted two more home, completing his hat trick and putting the score at 6-0 going into the second quarter.

The Crunch added five more goals by Gabriel Pewu, Sami Mutemwa, David Jordan, and Admir Suljevic (2), to extend the lead 11-0 going into the half.  The Crunch kept its momentum going in the second half, adding five more goals from Jordan (1), Derezic (1), and Suljevic (3), who scored to complete his hat trick. The Crunch led 16-1 at the end of the 3rd.

In the 4th quarter, Cvecko scored his second of the night, and Ryan Minick found the back of the net for his first, adding a late goal to complete the Crunch’s 17 point lead over the Swerve. Forward Admir Suljevic earned the MetroHealth ‘Man of the Match’ honors recording 5 goals and 2 assists.

Cleveland improves to 11-0, and heads home this weekend to take on the Swerve again 7 PM ET Saturday, March 19, for Fan Appreciation Night at the Soccer Sportsplex in North Olmsted, Ohio. Seating for Saturday’s home game is on a first-come, first-serve basis. Tickets for the March 19 game are on sale now and can be purchased at https://www.theclevelandcrunch.com/tickets. Few tickets are left. ***Tickets will not be sold at the door for Fan Appreciation Night.